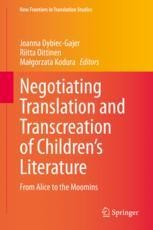 From Alice to the Moomins

This book offers fresh critical insights to the field of children’s literature translation studies by applying the concept of transcreation, established in the creative industries of the globalized world, to bring to the fore the transformative, transgressional and creative aspects of rewriting for children and young audiences. This socially situated and culturally dependent practice involves ongoing complex negotiations between creativity and normativity, balancing text-related problems and genre conventions with readers’ expectations, constraints imposed by established, canonical translations and publishers’ demands. Focussing on the translator’s strategies and decision-making process, the book investigates phenomena where transcreation is especially at play in children’s literature, such as dual address, ambiguity, nonsense, humour, play on words and other creative language use; these also involve genre-specific requirements, for example, rhyme and rhythm in poetry. The book draws on a wide range of mostly Anglophone texts for children and their translations into languages of limited diffusion to demonstrate the numerous ways in which information, meaning and emotions are transferred to new linguistic and cultural contexts. While focussing mostly on interlingual transfer, the volume analyses a variety of translation types from established, canonical renditions by celebrity translators to non-professional translations and intralingual rewritings. It also examines iconotextual dynamics of text and image. The book employs a number of innovative methodologies, from cognitive linguistics and ethnolinguistics to semiotics and autoethnographic  approaches, going beyond text analysis to include empirical research on children’s reactions to translation strategies. Highlighting the complex dynamics at work in the process of transcreating for children, this volume is essential reading for students and researchers in translation studies, children’s fiction and adaptation studies.

Joanna Dybiec-Gajer is a translation scholar, educator and practitioner, and an Associate Professor at the Pedagogical University of Kraków, where she is Head of the Chair for Translator Education. Her main research interests concern translation for young audiences, translator training and translation as a profession. She has recently published a monograph on the translation history of Heinrich Hoffmann’s controversial children’s classic Der Struwwelpeter in Poland (Złota Różdżka. Od książki dla dzieci po dreszczowiec raczej dla dorosłych, [Polish Struwwelpeter. From a Children’s Book to an Adults’ Thriller, 2017]). Her other book publications include Zmierzyć przekład? Z metodologii oceniania w dydaktyce przekładu pisemnego [Measuring Translation. Assessment Methodology in Translation Education] (2013) and Guidebook Gazes. Poland in American and German Travel Guides (2004); she also co-authored, with Maria Piotrowska, Verba Volant, Scripta Manent. How to write an M.A. thesis in Translation Studies (2012). Joanna Dybiec-Gajer was Head of the Organizing Committee of the international conference “From Morals to the Macabre in Translation for Children” held at the Pedagogical University of Kraków (April 4-5, 2017). She has been a member of European Society of Translation Studies since 2011.
Riitta Oittinen holds a PhD in Translation Studies and has taught translating (translating for children, translating the verbal and the visual as well as multimodality in translation) since 1987. In 2019 she – as artist, scholar, teacher, and mentor – received the Anne Devereaux Jordan Award given by ChLA (the Children’s Literature Association). She has taught translation in several countries in Europe and beyond and she serves as an Adjunct Professor (Docent) at the Universities of Tampere and Helsinki. She also holds the position of Senior Lecturer at Tampere University. She has written and illustrated well over 200 publications: books, articles, animated films, illustrations, and has held art exhibitions in and outside Finland. Her brand new book Translating Picturebooks, coauthored by Anne Ketola, and Melissa Garavini, was published by Routledge in 2018. Her other publications include titles such as Translating for Children 2000 (London: Garland Publishing, translated into Spanish in 2003), and papers in journals, such as in Meta (University of Montréal) in 2003 Translation for Children and in 2008 The Verbal, the Visual, the Translator in collaboration with Klaus Kaindl; in 2008 she co-edited with Maria González Davies Whose Story? Translating the Verbal and the Visual in Literature for Young Readers (Cambridge).
Małgorzata Kodura holds a PhD in Linguistics. A certified translator for English and a translator trainer, she is currently working as an Assistant Professor at the Pedagogical University of Kraków. She is a staff member of the Chair of Translation Education, whose translation programme is included in European Master's in Translation network initiated by the European Commission. She teaches practical courses in translation, including literary translation, and courses in translation theory. Her interests in the area of translation studies focus on translator training and new technologies for translators.