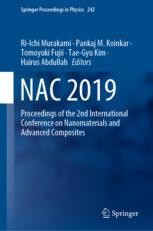 Proceedings of the 2nd International Conference ​on Nanomaterials and ​Advanced Composites

This book presents selected articles from the 2nd International Conference on Nanomaterials and Advanced Composites, which brings together leading researchers and professionals from academia and industry to present their findings and provides a platform for the exchange of ideas and future collaboration. The book covers eight topics, including nanomaterials, polymer materials, mechanical materials, materials chemistry, materials physics, ceramics, recycling materials and green composites.

Ri-ichi Murakami is a Professor Emeritus of Tokushima University, Japan, and a Professor at the Department of Materials Science and Engineering at the National Taiwan University of Science and Technology (NTUST). He received his Ph.D. from the Tokyo Institute of Technology, Japan. He is an elected fellow of Japan Society of Mechanical Engineers. He is Vice Editor-in-Chief of Frontiers in Materials, one of the founders of the International Conference on Advanced Materials Development and Performance and also a committee member of the International Conference on Nanomaterials and Advanced Composites. His research interests include fatigue of surface modified materials and advanced composites, ceramic thin-film coatings and green composites.
Pankaj Koinkar received his Ph.D. in Physics (Materials Science) from North Maharashtra University, India, in 2005. He joined the Center for International Cooperation in Engineering Education (CICEE), Tokushima University, Japan, as an Assistant Professor in March 2007. Currently, he is an Associate Professor at the Department of Optical Science and Technology at Tokushima University. His research areas include 2D nanostructures, field emission microscopy, sensors and engineering education.
Tomoyuki Fujii is an Associate Professor at the Department of Mechanical Engineering at Shizuoka University. He received his Ph.D. in Mechanical Engineering from Nagoya University in 2007. Prior to joining Shizuoka University in 2009, he was a researcher at Nisshin Steel Co., Ltd. His research interests encompass the mechanical and corrosion behavior of advanced materials.
Tae-Gyu Kim is a Professor at the Department of Nanomechatronics Engineering at Pusan National University, Korea. His research interests focus primarily on nanotechnology for synthesis and characterization of CVD boron-doped diamond (BDD), diamond-like carbon (DLC) films, electrospinning nanofabrication, and smart window research. His research relates to the application of diamond electrical devices in the post-silicon era. Recently, he has pioneered single-crystalline and polycrystalline CVD diamond growth technology on iridium, GaN, and single-crystal diamond substrates using microwave chemical vapor deposition, with a focus on the synthesis of heat sink materials for power devices. The development of optimal BDD electrodes has led to his current research on wastewater treatment and extreme environmental devices.
Hairus Abdullah received his doctoral degree in Material Science and Engineering from NTUST in May 2016. He was also a Senior Lecturer/Assistant Professor at the Department of Industrial Engineering, Universitas Prima Indonesia, Medan, Indonesia. Currently, he is an assistant professor at the Department of Materials Science and Engineering, NTUST, Taipei, Taiwan. His research fields are photocatalysis (including hydrogen evolution reaction, pollutant degradation, and chemical conversion), electrocatalysis, photocatalytic antibacterial system, and nanomaterial preparation.