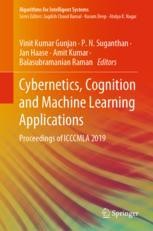 This book provides a collection of selected papers presented at the International Conference on Cybernetics, Cognition and Machine Learning Applications (ICCCMLA 2019), which was held in Goa, India, on 16–17 August 2019. It covers the latest research trends and advances in the areas of data science, artificial intelligence, neural networks, cognitive science and machine learning applications, cyber-physical systems, and cybernetics.

Vinit Kumar Gunjan, Associate Professor in Department of Computer Science & Engineering at CMR Institute of Technology Hyderabad (Affiliated to Jawaharlal Nehru Technological University, Hyderabad).  An active researcher; published research papers in IEEE, Elsevier & Springer Conferences, authored several books and edited volumes of Springer series, most of which are indexed in SCOPUS database. Awarded with the prestigious Early Career Research Award in the year 2016 by Science Engineering Research Board, Department of Science & Technology Government of India. Senior Member of IEEE, An active Volunteer of IEEE Hyderabad section; volunteered in the capacity of Treasurer, Secretary & Chairman of IEEE Young Professionals Affinity Group & IEEE Computer Society. He was involved as organizer in many technical & non-technical workshops, seminars & conferences of IEEE & Springer. During the tenure he had an honour of working with top leaders of IEEE and was awarded with best IEEE Young Professional award in 2017 by IEEE Hyderabad Section.

P N Suganthan, Professor at Nanyang Technological University, Singapore and Fellow of IEEE. He is a founding co-editor-in-chief of Swarm and Evolutionary Computation (2010 - ), an SCI Indexed Elsevier Journal. His research interests include swarm and evolutionary algorithms, pattern recognition, forecasting, randomized neural networks, deep learning and applications of swarm, evolutionary & machine learning algorithms. His publications have been well cited (Google scholar Citations: ~33k). His SCI indexed publications attracted over 1000 SCI citations in a calendar year  since 2013. He was selected as one of the highly cited researchers by Thomson Reuters every year from 2015 to 2018 in computer science. He served as the General Chair of the IEEE SSCI 2013. He is an IEEE CIS distinguished lecturer (DLP) in 2018-2020. He has been a member of the IEEE (S'91, M'92, SM'00, Fellow’15) since 1991 and an elected AdCom member of the IEEE Computational Intelligence Society (CIS) in 2014-2016.

Jan Haase is Lecturer at Helmut Schmidt University of the Federal Armed Forces, Hamburg  and temporary professor at University of Lübeck. He is an active volunteer of IEEE and was IEEE Region 8 conference coordination subcommittee chair in 2013-14. He was IEEE Austria Section Chair in 2010-12. His research interests include Embedded Systems, Modelling & Simulation, Power Estimation.

Balasubramanian Raman, Professor in the Department of Computer Science and Engineering at Indian Institute of Technology Roorkee from 2013. He has obtained MSc degree in Mathematics from Madras Christian College (University of Madras) in 1996 and PhD from Indian Institute of Technology Madras in 2001. He was a post-doctoral fellow at University of Missouri Columbia, USA in 2001–2002 and a post-doctoral associate at Rutgers, the State University of New Jersey, USA in 2002–2003. He joined Department of Mathematics at Indian Institute of Technology Roorkee as Lecturer in 2004 and became Assistant Professor in 2006 and Associate Professor in 2012. He was a Visiting Professor and a member of Computer Vision and Sensing Systems at University of Windsor, Canada during May August 2009. So far he has published more than 190 papers in reputed Journals and Conferences. His area of research includes vision geometry, digital watermarking using mathematical transformations, image fusion, biometrics and secure image transmission over wireless channel, content based image retrieval and hyperspectral imaging.

Amit Kumar, PhD is a passionate Forensic Scientist, Entrepreneur, Engineer, Bioinformatician and an IEEE Volunteer. In 2005 he founded first Private DNA Testing Company BioAxis DNA Research Centre (P) Ltd in Hyderabad, India with an US Collaborator. He has vast experience of training 1000+ Crime investigation officers and helped 750+ Criminal and non-criminal cases to reach justice by offering analytical services in his laboratory. Amit was member of IEEE Strategy Development and Environmental Assessment committee (SDEA) of IEEEMGA. He is senior member of IEEE and has been a very active IEEE Volunteer at Section, Council, Region, Technical Societies of Computational Intelligence and Engineering in Medicine and Biology and at IEEE MGA levels in several capacities. He has driven number of IEEE Conferences, Conference leadership programs, Entrepreneurship development workshops, Innovation and Internship related events. Currently He is also a visiting Professor at SJB Research Foundation and Vice Chairman of IEEE India Council and IEEE Hyderabad Section.