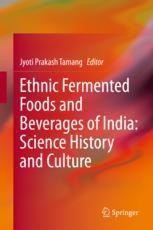 The book begins with detailed chapters on various aspects including food habits, dietary culture, and the history, microbiology and health benefits of fermented Indian food and beverages. Subsequent chapters describe unique and region-specific ethnic fermented foods and beverages from all 28 states and 9 union territories. In turn the classification of various ethnic fermented foods and beverages, their traditional methods of preparation, culinary practices and mode of consumption, socio-economy, ethnic values, microbiology, food safety, nutritional value, and process optimization in some foods are discussed in details with original pictures. In closing, the book addresses the medicinal properties of the fermented food products and their health benefits, together with corresponding safety regulations.
Show all
About the authors

Professor Dr. Jyoti Prakash Tamang is one of the pioneer microbiologists working on the interpretation of “ethno-microbiology” to molecular food microbiology associated with age-old ethnic fermented foods and beverages of India, Nepal and Bhutan, a field he has investigated for the past 33 years using a range of metagenomics/omics and bioinformatics tools. He has also sparked significant interest in ethnic fermented foods by establishing knowledge-based resources and promoting academic interest in India. He has more than 154 publications to his credit, including several books with international publishers - Himalayan Fermented Foods: Microbiology, Nutrition, and Ethnic Values (CRC Press, New York 2010), Fermented Foods and Beverages of the World (CRC Press, 2010), Health Benefits of Fermented Foods and Beverages (CRC Press, 2015) and Ethnic Fermented Foods and Alcoholic Beverages of Asia (Springer Nature, New Delhi 2016). He has received several national and international awards, and is currently the senior-most Professor in Microbiology and Dean of Sikkim Central University, Gangtok, India.