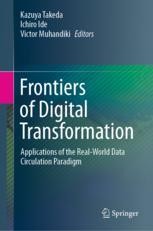 Proposing the concept of real-world data circulation (RWDC), this book presents various practical and industry-related studies in human, mechanical, and social data domains. RWDC is a new field of study, established by the information technology (IT) community.

In the real world, the speed of data transmission between computers surpassed that of human communications long ago and has since expanded exponentially. As a result, the origin of the majority of data has become non-human, mechanical, or natural sources; in fact, humans are merely the source of a small part of the current data explosion. Such expanding data transmission does not simply consist of single source–destination pairs, but actually circulates over a complex network connecting numerous sources and destinations. Such circulation is an important aspect of the underlying systems. Based on this concept, in order to tame and control the massive amount of data originating from non-human sources, the authors have been considering the insertion of acquisition, analysis, and implementation processes in the flow of data circulation.

This book introduces the outcome of the RWDC degree program organized at Nagoya University, Japan, collecting contributions from graduate students enrolled in the program from various research fields targeting diverse applications. Through examples of RWDC, the resulting creation of social value is illustrated. This book will be useful not only for those working on the topics discussed, but also to anyone who is interested in RWDC, digital transformation, and Industry 4.0.

Kazuya Takeda is a Professor at the Institutes of Innovation for Future Society, Nagoya University, Japan. He received his B.E., M.E., and Doctor of Engineering degrees from Nagoya University, in 1983, 1985, and 1994, respectively. From 1986 to 1989 he was a researcher at the Advanced Telecommunication Research laboratories (ATR), Japan. He was a Visiting Scientist at MIT, USA from November 1987 to April 1988, and from 1989 to 1995, he was a researcher and research supervisor at KDD Research and Development Laboratories, Japan.

Victor Muhandiki is a Designated Professor at the Institutes of Innovation for Future Society, Nagoya University, Japan and also a Senior Researcher, International Lake Environment Committee Foundation (ILEC), Japan. He received his BSc. (Civil Engineering) degree from the University of Nairobi, Kenya in 1993, M.E., and Doctor of Engineering degrees from Kyoto University, Japan in 1997 and 2001, respectively. Over the past 20 years he has worked in the higher education field in Japan in various capacities. He has also been involved in international development work in the environment and water sectors and has traveled widely in Africa and Asia for research, field surveys and official missions and has consulted for various agencies including the Global Environment Facility (GEF), Japan Bank for International Cooperation (JBIC), Japan International Cooperation Agency (JICA), Organisation for Economic Co-operation and Development (OECD), World Bank (WB), and World Bank Institute (WBI).