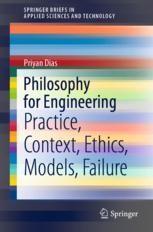 This book highlights the unique need for philosophy among engineers, which stems from issues regarding their knowledge (epistemology), role or being (ontology) and influence (ethics). It discusses practice, context, ethics, models and failure as key aspects of engineering, and provides an easy but essential introduction to philosophy for engineers by presenting four key philosophers and linking them to these aspects: Karl Popper (failure), Thomas Kuhn (models), Michael Polanyi (practice & ethics) and Martin Heidegger (context & ethics). Popper, Kuhn and Polanyi are philosophers of science (epistemologists) who have challenged the view that science is a ‘cool, detached’ discipline, since it also depends on human imagination (Popper), consensus (Kuhn) and judgment plus artistry (Polanyi); factors that are central to engineering. Heidegger (an ontologist) critiqued technology on the one hand (ethics), but also stressed the importance of ‘doing’ over ‘knowing,’ thus ‘authenticating’ the highly pragmatic engineering profession. Science is the ‘core’ component of engineering, which is overlaid by a variety of heuristics . Practice-based knowledge can be formalized, with artificial intelligence (AI) offering a valuable tool for engineering, just as mathematics has done for science. The book also examines systems thinking in engineering. Featuring numerous diagrams, tables and examples throughout, the book is easily accessible to engineers.

Priyan Dias obtained a doctorate from Imperial College at the University of London and is now a Senior Professor in the Civil Engineering Department at the University of Moratuwa. He has been Head of Department from 2007 to 2010 and the inaugural Director of Research for the university from 2014 to 2017. He is a Fellow and currently Vice-President of the National Academy of Sciences (Sri Lanka); and also an associate editor of the international journal Civil Engineering and Environmental Systems. His research interests span areas such as concrete technology, systems methods and engineering philosophy. A book of his on reinforced concrete design examples is widely used by students and structural engineers.

“This new book by civil engineer Priyan Dias on philosophy for engineering is a significant contribution to an emerging field. Unlike most other works in this area, it does not focus just on ethics or design, but maps out and interweaves a broad range of issues, while drawing on ideas from a number of philosophers.” (Carl Mitcham, International Professor of Philosophy of Technology, Renmin University of China and Professor Emeritus of Humanities, Arts and Social Sciences at the Colorado School of Mines; author of “Thinking through technology: the Path between Engineering and Philosophy” (1994) and “Steps toward a Philosophy of Engineering” (2020))

“This book offers remarkable reflections by an engineer for engineers and engineering students, introducing engineering to its philosophical dimensions. Questions of modelling and tacit knowledge appear at the interface of science and technology, theory and practice, epistemology and ethics. Are engineers makers or thinkers? From simple beginnings Priyan Dias leads the reader to central issues for engineering as a vocation - with many of the most important philosophers of the 20th century as his key witnesses.” (Alfred Nordmann, Professor of Philosophy of Science and of Technoscience at Darmstadt Technical University)

“[Professor Dias] believes, and I agree with him, that most thinkers and practitioners see philosophy and engineering as independent topics whereas they have much to offer each other…. Critics have tended to focus on technology as applied science without recognizing what Aristotle called phronesis or practical wisdom – the intellectual virtue of practical reasoning…..In this book Professor Dias poses some interesting questions. What defines engineering? Are engineers makers or thinkers? Is failure essential for success? What is the role of a model? Is engineering value neutral? In exploring the issues of practice, context, ethics, models and failure he introduces us to four significant philosophers, Popper, Kuhn, Polanyi and Heidegger. Although they are not usually associated with engineering, Professor Dias shows how each one has suggested ideas that shed light on the nature of engineering…. In science purpose is a pursuit of absolute truth whereas, as Professor Dias shows, the purpose of engineers is to fulfil a human need by making the best decisions that create safe artefacts. Central to those decisions is the availability of dependable theoretical models. Those models …. are clearly underpinned by ethical stances.” (From the Foreword by Emeritus Professor David Blockley, DSc, FREng, University of Bristol, U.K.)

“Priyan Dias’ book is timely because it is becoming urgent for engineers to understand the often-dangerous limitations and constraints within which they choose to work. There are problems in the profession, and deeper thinking is required. The book proposes that engineers should read what philosophers have to say. The field is impossibly large, so discussion is restricted to four major philosophers: Popper, Polanyi, Kuhn and Heidegger. Heidegger, the author’s favourite, is particularly useful regarding the way engineers must be aware of the social context of their thoughts and actions. A good case is made for all formal engineering education to include philosophy of engineering.” (Emeritus Professor David Elms, University of Canterbury, New Zealand)

“In the spirit of polymath Michael Polanyi, Priyan Dias holistically addresses philosophy and engineering together, bringing readers along on his journey. His skill at simultaneously grasping these apparently disparate fields, as well as multiple aspects of these two fields, adds insight and richness to both. His resulting book is a very welcome, nice, and informative work. It clearly fills a void in the literature. And fills it quite effectively.” (Dr Bruce Vojak, Founder of Breakthrough Innovation Advisors; former Associate Dean & Adjunct Professor, College of Engineering, University of Illinois at Urbana Champaign, U.S.A.)