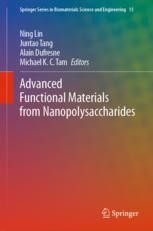 Dr. Ning Lin is an Associate Professor at School of Chemistry, Chemical Engineering and Life Sciences, Wuhan University of Technology, China, where he received his B.S. and M.S degrees in 2007 and 2011, respectively. Prof. Lin received his Ph.D. degree in 2014 at the International School of Paper, Print Media and Biomaterials (Pagora) at University Grenoble Alpes in France, and was awarded the State Scholarship Fund by Chinese Scholarship Council (CSC) for his Ph.D. studies. He then completed one-year's postdoctoral research. He has 27 scientific publications, 1 co-authored book and 7 patents. Prof. Lin's research interests include chemical modification, design and development of biomass-based nanopolysaccharides (nanocellulose, nanochitin, starch nanocrystals) and functional applications.

Dr. Juntao Tang is an Associate Professor at the College of Chemistry and Chemical Engineering at Central South University, China. He received his Ph.D. degree in Chemical Engineering under the guidance of Prof. Michael Tam at the University of Waterloo, Canada in 2016 and completed one-year’s postdoctoral research. He received the Chinese Government Award for outstanding students abroad in 2015. Prof. Tang has 20 journal articles and 2 patents in the fields of colloids and polymer science. His current research interests involve designing and developing functional nanomaterials derived from sustainable resources for advanced applications.

Dr. Alain Dufresne received his Ph.D. in 1991 from INSA Toulouse (Electronics) and was a postdoctoral researcher at Polytechnique Montreal, and a Lecturer at INSA Lyon. He was appointed as an Associate Professor at Grenoble University in 1993, and then as a Professor in 2001. He has been a Professor at Grenoble INP since 2003. He was a Visiting Professor at UFRJ and Embrapa Fortaleza (Brazil), and UKM (Malaysia). His research interests include the processing and characterization of renewable nanocomposites. He has published more than 280 peer-reviewed papers. Prof. Dufresne received the 2016 International Nanotechnology Division Award and FiberLean® Technologies Prize awarded by TAPPI and is in the 2016 top 300 most-cited researchers in materials science and engineering/Elsevier Scopus Data. He is also a member of the editorial board of Carbohydrate Polymers, ACS Sustainable Chemistry & Engineering, Fibers, Materials Research, the Ibero-American Journal of Materials and the Journal of Korean Wood Science and Technology, as well as an associate editor of Polimeros: Ciencia e Tecnologia.

Dr. Michael K.C. Tam obtained his B.Eng. and Ph.D. degrees in Chemical Engineering from Monash University, Australia in 1982 and 1991 respectively. He spent 18 months as a postdoctoral fellow at the Department of Chemical Engineering, McMaster University Canada, and subsequently taught at Nanyang Technological University, Singapore for 15 years. In June 2007 he joined the Department of Chemical Engineering, University of Waterloo as a tenured Full Professor, and holds the position of University Research Chair in the field of functional colloids and sustainable nanomaterials. He is an active member of the Waterloo Institute for Nanotechnology. Prof. Tam's research interests include sustainable nanomaterials, colloids, self-assembly systems, polymer-surfactant interactions, and controlled delivery systems. He has published more than 300 journal articles in various fields of polymer science and engineering. His total citations exceed 13,500 and his H-index is 62. He is also an associate editor of ACS Sustainable Chemistry & Engineering.