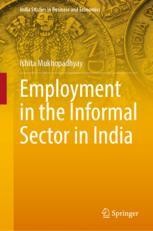 Employment in the Informal Sector in India

This book examines the transition, transformation and future of the informal sector, informal work and informal workers in India from the perspectives of development economics as well as those of international organisations.

Though the informal sector has a long tradition in India, it has been  transformed in the wake of neoliberal economic policy. The sector took on new prominence in the 1980s, and has since grown much stronger and established itself as the country’s dominant sector.  Several reports on the informal sector appeared during this period, and the status of the sector in India is positioned in the context of this international scenario.

The major debate concerns the definition of this sector. While international labour statisticians had suggested a mechanism of definition and measurement of the sector, Indian official statistics took a different approach. The book analytically elaborates the different definitions and measurement controversies in different countries and contextualises the official Indian position.  While deliberating on the size, contribution, productivity, and potential of the informal sector, the heterogeneity and decomposition of the sector with respect to these aspects are also suggested. The book develops a political economic interpretation of the historical transition of the informal sector in India, employing heterodox economics as a theoretical basis, with a critical note on standard neoclassical economic analysis. The final part of the book focuses on understanding the development of capitalism in the country under neoliberalism, as that development is crucial to understanding the informal sector in any country, and particularly in India. In the current context, the volume will be of great relevance to researchers, non-government organizations, policy makers and international organisations working on the topic.

Ishita Mukhopadhyay is Professor in Department of Economics, University of Calcutta since1987. She is also Honororary Director, Women’s Studies Research Centre, University of Calcutta since 2002. She is a researcher in Labour Economics and also supervised several doctoral dissertations on informal employment. She is a development economist who also carries on interdisciplinary exercise. She also focuses on gender inequality and other socioeconomic inequalities.