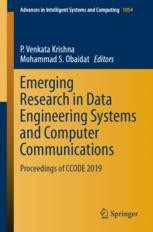 Dr. P. Venkata Krishna is currently a Professor of Computer Science and Director at Sri Padmavati Mahila University, Tirupati, India. He received his B. Tech in Electronics and Communication Engineering from Sri Venkateswara University, Tirupathi, India, M. Tech in Computer Science & Engineering from REC, Calicut, India and he received his Ph.D. from VIT University, Vellore, India. Dr.  Krishna has several years of experience working in the academia, research, teaching, consultancy, academic administration and project management roles. His current research interests include Mobile and wireless systems, cross layer wireless network design, QoS and Cloud Computing. He was the recipient of several academic and research awards such as the Cognizant Best Faculty Award for the year 2009-2010 and VIT Most Active Researcher Award for the year 2009-2010. His biography was also selected for inclusion in the 2009-2010 edition of Marquis Who’s Who in Science and Engineering and the Marquis Who’s Who in the World, California, USA. He is the editor for ObCom series of International conference proceedings and he is founding member for ObCom International Conference. He has authored over 200 research papers in various national and international journals and conferences. He has produced 17 Ph.D’s and 1 MS by research degree under his guidance. He has guided several masters and bachelors projects. He has authored 15 books on Computer Networks and Programming Languages. He is currently serving as editor in chief for International Journal of Smart Grid and Green Communications, Inderscience Publishers, Switzerland and also editor for International Journal of Systemics, Cybernetics and Informatics and Journal of Advanced Computing Technologies. He is an Associate Editor for International Journal of Communication Systems, Wiley. He is senior member several professional societies such as IEEE, ACM, CSI, IE(I) etc.

Prof. Mohammad S. Obaidat received his Ph.D. and M. S. degrees in Computer Engineering with a minor in Computer Science from The Ohio State University, Columbus, Ohio, USA. Dr. Obaidat is currently the Chair and Full Professor of Computer and Information Science at Fordham University, NY, USA. Among his previous positions are Chair of the Department of Computer Science and Director of the Graduate Program at Monmouth University, Dean of the College of Engineering at Prince Sultan University and Advisor to the President of Philadelphia University for Research, Development and Information Technology. He has received extensive research funding and has published Thirty Eight (38) books and over Six Hundreds (600) refereed technical articles in scholarly international journals and proceedings of international conferences.  Prof. Obaidat has served as a consultant for several corporations and organizations worldwide. Mohammad is the Editor-in-Chief of the Wiley International Journal of Communication Systems, the FTRA Journal of Convergence and the KSIP Journal of Information Processing. He is also an Editor of IEEE Wireless Communications. Between 1991-2006, he served as a Technical Editor and an Area Editor of Simulation: Transactions of the Society for Modeling and Simulations (SCS) International, TSCS. He also served on the Editorial Advisory Board of  several journals and conferences.