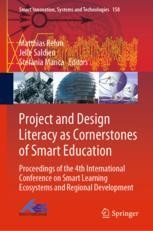 Project and Design Literacy as Cornerstones of Smart Education

The book includes high-quality papers presented at the 4th International Conference on Smart Learning Ecosystems and Regional Development at Università Roma Tor Vergata, Italy, from 22 to 24 May, 2019. Providing insights into the relevance of smart learning ecosystems (schools, campuses, the workplace, informal learning contexts, etc.) for regional development and social innovation, it also discusses how citizens’ involvement with smart ecosystems can be increased and made more effective.

Dr. Matthias Rehm received his Diploma and Doctoral degrees (with honors) in 1998 and 2001, respectively, from the Bielefeld University in Germany. In 2008, he successfully completed his habilitation process in Informatics at the University of Augsburg in Germany. He is the Head of the Human–Machine Interaction Group in the Department of Architecture, Design, and Media Technology and will be leading the upcoming cross-departmental Human Centered Robot Interaction Lab at the Technical Faculty of IT and Design at Aalborg University. His research is focused on modeling social, affective, and cultural aspects of everyday behavior for intuitive human–machine interactions. He has over 100 peer-reviewed publications in the area of robotics, HCI, technology-enhanced learning, multimodal interaction, and culture-aware technology. In 2010, he became founding and steering group member of Aalborg University’s cross-departmental robotics program Aalborg U Robotics. In 2014, he co-founded an international, Canadian-based startup that is actively pushing the limits in smart learning technologies. In 2015, he was elected vice president for the International Association for Smart Learning Ecosystems and Regional Development. Dr. Jelle Saldien is an Associate Professor in the Department of Industrial Systems Engineering and Product Design of the Faculty of Engineering and Architecture at Ghent University, Belgium. He received his M.S. degree in Industrial Science ICT at DeNayer Institute (now KULeuven) in 2003 and an additional M.S. degree in Product Development at Artesis (now UAntwerpen) in 2005. In 2009, he received his Ph.D. at the Vrije Universiteit Brussel on the design and development of the social robot Probo. From 2010, he was lecturer in Industrial Design at the Howest University College West Flanders. Since 2013, he is appointed as a Professor of Industrial Design at Ghent University, research coordinator of the UGent Industrial Design Center, and from 2014–2017 steering member of Flanders Make VD4. Jelle Saldien is author of over 60 technical publications, proceedings, editorials, and books. He is member of the program committee of the ACM SIGCHI International Conference on Tangible, Embedded and Embodied Interaction (TEI). His research looks at the design of interactions between human and product (Interaction Design). Dr. Stefania Manca is a researcher at the Institute of Educational Technology of the National Research Council of Italy. She has been active in the field of educational technology, technology-based learning, distance education, and e-learning since 1995. She is currently investigating the value of social media and social networking sites for formal and informal learning purposes and in teachers’ and faculty staff’s professional development. She is also involved in the analysis of participatory practices in formal contexts of learning according to the Student Voice approach, and in the use of social network site use by persons with disabilities.Among her research interests, there are also MOOCs, pedagogical approaches to learning analytics and big data. She has published numerous articles on these topics and given presentations in conferences. She is member of several journal scientific committees, editorial boards, and co-director of the Italian Journal of Educational Technology, one of the most highly ranked Italian journals in this area.