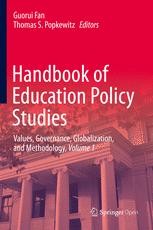 Thomas S. Popkewitz is a curriculum theorist and professor from the United States of America, on the faculty at the University of Wisconsin–Madison School of Education. His studies are concerned with the knowledge or systems of reason that govern educational policy and research related to pedagogy and teacher education. His research includes histories of the present, ethnographic and comparative studies of national educational reforms in Asia, Europe, Latin America, Southern Africa, and the US. His book Cosmopolitanism and the Age of School Reform (2008) explores the systems of reason in pedagogy through historically examining the changing images and narratives of Enlightenment concerns with cosmopolitanism. He has written or edited approximately 30 books and 200 articles in journals and book chapters. Two of his books (Paradigms and Ideology in Educational Research and A Political Sociology of Educational Reform) have won awards for their contribution to educational studies. His work has been translated into twelve languages (Chinese, Danish, French, German, Greek, Hungarian, Japanese, Portuguese, Norwegian, Russian, Spanish and Swedish).