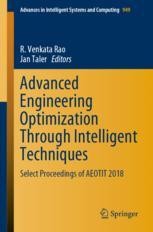 Dr. R. Venkata Rao is a Professor at the Department of Mechanical Engineering, S. V. National Institute of Technology, Surat, India. He has more than 28 years of teaching and research experience. He completed his B.Tech. in 1988, M.Tech. in 1991, Ph.D. in 2002, and obtained his D.Sc. in 2017. Dr. Rao’s research interests include: advanced optimization algorithms and their applications to design, thermal and manufacturing engineering, and fuzzy multiple attribute decision-making (MADM) methods and their industrial applications. He has more than 300 research papers to his credit, published in national and international journals and conference proceedings. He has received national and international awards for his research efforts. He is a reviewer for more than 80 national and international journals and serves on the editorial boards of several international journals. He has also been a Visiting Professor at Cracow University of Technology, Poland in January 2016, November 2016, and June 2018, at BITS Pilani Dubai campus in 2017, and at the Asian Institute of Technology, Bangkok in 2008, 2010, 2015 and 2018. He has authored six books entitled “Decision Making in the Manufacturing Environment Using Graph Theory and Fuzzy Multiple Attribute Decision Making Methods” (Volume 1 (2007) and Volume 2 (2013)), “Advanced Modeling and Optimization of Manufacturing Processes: International Research and Development” (2010), “Mechanical Design Optimization Using Advanced Optimization Techniques” (2012), “Teaching-Learning-Based Optimization Algorithm And Its Engineering Applications” (2016), and “Jaya: An Advanced Optimization Algorithm And Its Engineering Applications” (2018), all of which were published by Springer.

Dr. Jan Taler is a Professor and Director of the Institute of Thermal Power Engineering of Cracow University of Technology, Poland. He has more than 40 years of teaching and research experience, having completed his M.Sc. in 1974, Ph.D. in 1977, and D.Sc. in 1987. He has published about 300 articles in scientific journals. He has authored 10 books and over 20 chapters in scientific monographs and entries in the Encyclopedia of Thermal Stresses. He conducts research in the field of heat transfer engineering and thermal power engineering with special interest in the following areas – inverse heat conduction problems, measurement of heat flux and heat transfer coefficient, ash fouling and slagging in steam boilers, dynamics of large steam boilers, and optimization of thermal systems. He has participated in many research projects funded by industry and the Polish Committee for Scientific Research. Many of his innovative technical solutions have been implemented in power plants.