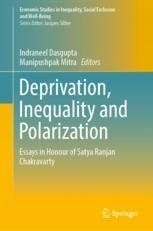 This book offers a collection of original, state-of-the-art essays addressing various aspects of the economic analysis of inequality, deprivation, poverty measurement and social polarization, at both the theoretical and empirical level. Written by leading authorities in the fields of distributional analysis and normative economics, the respective chapters present detailed overviews of cutting-edge literature, as well as stand-alone research. Compiled as a tribute to Satya Ranjan Chakravarty’s lifetime contributions in the fields of normative economics and distributional analysis, it represents an indispensable resource for researchers, policymakers and doctoral students working on issues pertaining to income/wealth distribution, social inclusion and poverty reduction.

Indraneel Dasgupta is a Professor of Economics at the Indian Statistical Institute, Kolkata and research fellow at the Institute for the Study of Labor (IZA), Bonn. He received his PhD in Economics from the University of California, Riverside in 1997, and taught at Deakin University, Australia (lecturer); Nottingham University, UK (lecturer, senior lecturer and reader); Durham University, UK (professor); and the Centre for Studies in Social Sciences Calcutta, India (professor) prior to joining the Indian Statistical Institute. His research interests lie in the areas of microeconomic theory, development economics and public economics. His research papers have been published in journals such as Economic Theory, European Economic Review, Journal of Economic Inequality, Journal of Economic Theory, Journal of Public Economics, Oxford Economic Papers, Public Choice and Social Choice and Welfare. He currently serves on the editorial board of the Journal of Development Studies.

Manipushpak Mitra is a Professor of Economics at the Indian Statistical Institute, Kolkata. He received his PhD in Economics from the Indian Statistical Institute, New Delhi, India in 2000. His research interests lie in the areas of game theory, industrial organization, mechanism design under incomplete information, and social choice theory. His research papers have been published in journals such as Economica, Economic Theory, Economics Letters, Games and Economic Behavior, Journal of Institutional and Theoretical Economics and Theoretical Economics. He has also written a textbook on cooperative game theory jointly with Satya Ranjan Chakravarty and Palash Sarkar. He received the Mahalanobis Memorial Medal in 2012.