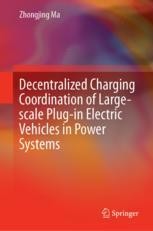 This book focuses on the design of decentralized optimization methods applied to charging strategies for large-scale PEVs in electrical power systems. It studies several classes of charging coordination problems in large-scale PEVs by considering the distinct characteristics of PEV populations and electrical power systems, and subsequently designs decentralized methods based on distinct optimization schemes – such as non-cooperative games, mean-field games, and auction games – to achieve optimal/nearly optimal charging strategies. In closing, several performance aspects of the proposed algorithms, such as their convergence, computational complexity and optimality etc., are rigorously verified and demonstrated in numerical simulations. Given its scope, the book will benefit researchers, engineers, and graduate students in the fields of optimization, game theory, auction games, electrical power systems, etc., and help them design decentralized methods to implement optimal charging strategies in large-scale PEVs.

Zhongjing Ma received the B.Eng. degree in the field of Automatic Control from Nankai University, Tianjin, China, in 1997, the M. Eng. and Ph.D. degrees from McGill University, Montreal, QC, Canada, in 2005 and 2009, respectively, advised by Prof. Peter Caines and Prof. Roland Malhame. After a period of time, from Jan. 2009 to Sept. 2010, as a postdoctoral research fellow with Prof. Duncan Callaway and Prof. Ian Hiskens, at the University of Michigan, Ann Arbor, he joined the school of Automation at the university of Beijing Institute of Technology, Beijing, China, in Sept. 2010, as an associate professor. He is currently Director of Institute of Electrical Engineering. He is an IEEE senior member.His research interests lie in the areas of optimal control, optimization, auction mechanism design, game theory, decentralized optimization of large-scale systems, and their applications in the electrical power systems. He has published more than 40 technical articles in IEEE Trans. on Automatic Control, Automatica, IEEE Trans. on Control Systems Technology, IEEE Trans. on Systems, Man, and Cybernetics: Systems, International Journal of Control, International Journal of Systems Science, and IEEE CDC etc.His article collaborated with Duncan Callaway and Ian Hiskens, “Decentralized charging control of large populations of plug-in electric vehicles” published in IEEE Trans. on Control Systems and Technology, is one of the most cited works in the topic of the PEV charging coordination, and has been cited nearly 400 times.He has joined the editorial board of the journal of “Nonlinear Analysis: Hybrid Systems” of the Elsevier press on February 2018 and has served as an Associate Editor since then. He also has been the reviewers of many renowned journals in the fields of systems and control, optimization, electrical power systems, power electronics etc., such as SIAM Journal on Control and Optimization, IEEE Trans. on Automatic Control, Automatica, Systems and Control Letter, IEEE Trans. on ControlSystems Technology, IEEE Trans. on Smart Grid, IEEE Trans. on Power Systems, IEEE Trans. on Industrial Electronics, IEEE Transactions on Industrial Informatics, IEEE Trans. on Control of Network Systems, IEEE Trans. on Automation Science and Engineering, IEEE Trans. on Circuits and Systems I, etc.