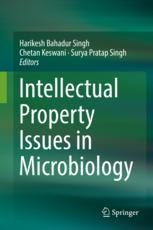 In the current era current era of significant innovations, science and technology are powerful tools improving human welfare through prosperity and sustainable development. The development of microbiology based industries in any given country is shaped by the characteristics of its technology—particularly its close relation to scientific knowledge, and by country-specific factors such as the level and nature of the scientific knowledge base, the institutional set-up, and the role assumed by the government, all of which influence the country's ability to exploit the new opportunities.

This unique book presents an integrated approach for sustained innovation in various areas of microbiology. Focusing on the industrial and socio-legal implications of IPR in microbiological advances, it offers a comprehensive overview not only of the implications of IPR in omics-based research but also of the ethical and intellectual standards and how these can be developed for sustained innovation.

The book is divided into three sections discussing current advances in microbiological innovations, recent intellectual property issues in agricultural, and pharmaceutical microbiology respectively. Integrating science and business, it offers a glimpse behind the scenes of the microbiology industry, and provides a detailed analysis of the foundations of the present day industry for students and professionals alike.

Harikesh Bahadur Singh is a Professor at the Department of Mycology and Plant Pathology, Institute of Agricultural Sciences, Banaras Hindu University, Varanasi, India. He has received several national and international awards for his key role in popularizing organic farming and translating agriculturally important microorganisms from lab to land. He also holds 20 U.S. patents, which have been successfully used for the commercial production of biopesticides in several industries in India.

Chetan Keswani is a Postdoctoral Fellow at the Department of Biochemistry, Institute of Science, Banaras Hindu University, Varanasi, India. He has a keen interest in regulatory and commercialization issues of agriculturally important microorganisms. He is an elected Fellow of the Linnaean Society of London, UK, and received the Best Ph.D. Thesis Award from the Uttar Pradesh Academy of Agricultural Sciences, India in 2015. He is an editorial board member of several respected agricultural microbiology journals.

Surya Pratap Singh is a Professor at the Department of Biochemistry, Institute of Science, Banaras Hindu University, Varanasi, India. He has worked at AIIMS, New Delhi; the University of Illinois; and John Hopkins Medical Institute, Baltimore, USA. He is a life member of the Endocrine Society, USA. His research team focuses on discovering novel neuroprotective herbal formulations for neurodegenerative diseases. Moreover, he has successfully isolated, formulated and patented various neuroprotective secondary metabolites from medicinal plants.