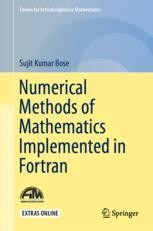 This book systematically classifies the mathematical formalisms of computational models that are required for solving problems in mathematics, engineering and various other disciplines. It also provides numerical methods for solving these problems using suitable algorithms and for writing computer codes to find solutions. For discrete models, matrix algebra comes into play, while for continuum framework models, real and complex analysis is more suitable. The book clearly describes the method–algorithm–code approach for learning the techniques of scientific computation and how to arrive at accurate solutions by applying the procedures presented. It not only provides instructors with course material but also serves as a useful reference resource. Providing the detailed mathematical proofs behind the computational methods, this book appeals to undergraduate and graduate mathematics and engineering students.
The computer codes have been written in the Fortran programming language, which is the traditional language for scientific computation. Fortran has a vast repository of source codes used in real-world applications and has continuously been upgraded in line with the computing capacity of the hardware. The language is fully backwards compatible with its earlier versions, facilitating integration with older source codes.

SUJIT KUMAR BOSE is a distinguished computer educationist and author of several useful books on computational and numerical mathematics. He was a Research Consultant at the Department of Civil Engineering, Indian Institute of Technology Kharagpur, from 2002 to 2014. He was also member of the Guest Faculty at the Department of Computer Science, Jadavpur University, Kolkata, from 1998 to 2006; a Senior Professor of Mathematics at the S.N. Bose National Centre for Basic Sciences, Kolkata, India, from 1993 to 1998; Professor and Head of the Department of Mathematics at the National Institute of Technology, Durgapur, India, from 1975 to 1993; an Assistant Professor at the West Bengal Educational Service, from 1965 to 1975; and a Lecturer at the West Bengal Junior Educational Service, from 1960 to 1965. In addition, he was a postdoctoral fellow at the University of California, Los Angeles, from 1972 to 1974.

Professor Bose is associated with several respected research institutes: Fellow of the Indian Academy of Sciences, India; member of the Indian Society of Theoretical and Applied Mechanics at the Department of Mathematics, Indian Institute of Technology Kharagpur; member of the Calcutta Mathematical Society; and member of the Indian Statistical Institute, Kolkata. He is awarded the Professor B. Sen Memorial Gold Medal for the Best Research in Elasticity, in 1978, and the Sardar Vallabhbhai Patel Award for the Excellence in Researches in Mathematical Sciences, in 2012. He obtained B.Sc. (Math Hons, 1957) and M.Sc. (Applied Mathematics, 1959) as well as D.Sc. (Applied Mathematics, 1971), all from the University of Calcutta, winning several gold medals. He was a Visiting Scholar at the Computational Mechanics Center, Georgia Institute of Technology, USA, and the Department of Applied Mathematics at the University of Twente, The Netherlands in 1989. Professor Bose has research interests in applied mathematics, solid mechanics, fluid mechanics and sediment transport.