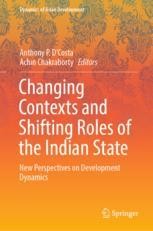 Changing Contexts and Shifting Roles of the Indian State

This book critically discusses the changing relationship between the Indian state and capital by examining the mediating role of society in influencing developmental outcomes. It theorizes the state’s changing context allowing the discussion of its pursuit of contradictory economic and social welfare goals simultaneously. Both structural and ideological factors are argued to contribute to a shifting context, but the centrality of re-distributive politics and the contradictions therein explain a lot of what the state does and cannot do. The book also examines what the state aspires to do but structurally cannot accomplish either because of the scale of the problem or the dysfunctionality that sets in with continuous reforms. The collection provides rich evidence on the contested forms of governance arising from changing contexts and shifting roles of the state. Readers will benefit from this recasting of the Indian state in terms of the actual forms of intervention today.

Changing Contexts and Shifting Roles of the Indian State is a timely book.  At a time when the question of the role of the state in promoting more inclusive forms of development has never been more urgent, this book provides a range of powerful and insightful case studies of how a changing Indian capitalism is impacting and in turn being impacted by the multi-stranded role of the Indian state. Patrick Heller, Professor of Sociology and International Affairs, Brown University, Providence.

Since the early 1990s, the Indian economy has moved away from a statist model of development to a more market-oriented one. However, very little scholarship exists that attempts to analyse India’s recent development experience from a political economy lens. This book, which is edited by two of India’s reputed scholars in the political economy of development, addresses this important gap in the literature. It provides an insightful account of the role of the state and the market in India’s economic resurgence in the last three decades. The book also contributes to a fresh understanding of what is meant by a twenty-first century developmental state in a globalised world.  The book will be valuable reading for all scholars of India, as well as to researchers in the political economy of development. Kunal Sen, Director, United Nations University – World Institute for Development Economics Research (UNU-WIDER), Helsinki.

This collection gives us a richer and more layered understanding of the Indian contemporary State. Rather than see the State as an unchanging entity with unchanging interests, the book argues that the role of the State changes with the context and with the change in political regime. Thus, taking contradictory decisions such as greater dispossession of land from the peasantry and expansion of the universe of economic rights is explainable. The argument is that we can have a better understanding when we see the Indian State as dealing with the ebb and flow of a democracy. C. Rammanohar Reddy, Former Editor, Economic and Political Weekly, Mumbai.

Anthony P. D'Costa is the Eminent Scholar in Global Studies and Professor of Economics at the University of Alabama in Huntsville. Previously he was the Chair and Professor of Contemporary Indian Studies, and Director of the Development Studies Program at the School of Social and Political Sciences, University of Melbourne. He was also affiliated with the University’s Australia India Institute for three years. During 2008–13, he was the Research Director and A.P. Moller-Maersk Professor of Indian Studies, Asia Research Centre at the Copenhagen Business School, Denmark. He was also with the University of Washington for 18 years. He has written extensively on the political economy of steel, auto, and IT industries covering themes of capitalism and globalization, economic and social development, business dynamics and innovations, and industrial restructuring. Currently his work focuses on employment challenges in late industrializing India and is working on a new framework called “compressed capitalism”. His recent books are After-Development Dynamics: South Korea’s Contemporary Engagement with Asia (edited, OUP, 2015), International Mobility, Global Capitalism, and Changing Structures of Accumulation: Transforming the Japan-India IT Relationship (Routledge, 2016), and The Land Question in India: State, Dispossession, and Capitalist Transition (coedited, OUP, 2017). He has published in World Development, Journal of Development Studies, Journal of International Development, Review of International Political Economy, Economic and Political Economy, Asian Business and Management, Industrial and Corporate Change, Cambridge Journal of Regions, Economy and Society, and Critical Asian Studies, among others. He has been a fellow of the American Institute of Indian Studies, Fulbright-Hays, Korea Foundation, Social Science Research Council, UN World Institute of Development Economics Research, Helsinki; Abe (Japan Foundation), and the East West Center in Honolulu.
Achin Chakraborty is a Professor of Economics and Director of the Institute of Development Studies in Kolkata, India. He obtained his Ph.D. from the University of California at Riverside, USA, in 1995. His areas of research interest include welfare economics, microeconomic issues in development economics, human development, health economics, environmental economics, and methodology of economics. He was earlier on the faculty of the Centre for Development Studies in Kerala. He has published widely in such journals as Economic Theory, Social Indicators Research, Journal of Quantitative Economics, Environment and Development Economics, Economic and Political Weekly, and others. He has co-edited with Anthony D’Costa the recently published book The Land Question in India: State, Dispossession and Capitalist Transition (OUP, 2017).