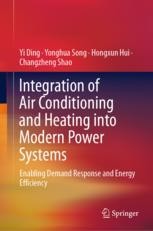 Integration of Air Conditioning and Heating into Modern Power Systems

This book focuses on the integration of air conditioning and heating as a form of demand response into modern power system operation and planning. It presents an in-depth study on air conditioner aggregation, and examines various models of air conditioner aggregation and corresponding control methods in detail. Moreover, the book offers a comprehensive and systematic treatment of incorporating flexible heating demand into integrated energy systems, making it particularly well suited for readers who are interested in learning about methods and solutions for demand response in smart grids. It offers a valuable resource for researchers, engineers, and graduate students in the fields of electrical and electronic engineering, control engineering, and computer engineering.

Yi Ding is a Professor in the College of Electrical Engineering, Zhejiang University (ZJU), also a scholar of Thousand Talent Program for Young Outstanding Scientists of China. Before he joined in ZJU, he was an Associate Professor (permeant position) in Technical University of Denmark (DTU), Denmark. He also held academic positions in University of Alberta, Canada and Nanyang Technological University, Singapore. He was also a Consultant as Energy Economist for Asian Development Bank in 2010. He is the executive director of the Applied Energy UNiLAB (Smart Grid Market Mechanism, SGM2). He is an editorial member of 5 international journals including Applied Energy, Electric Power System Research, Journal of Modern Power Systems and Clean  Energy, Intelligent Industrial Systems, Protection and Control of Modern Power Systems. He is also a guest editor for the special sections of IEEE Trans. on Power Systems and IEEE Trans. on Industrial Electronics. Dr. Ding is a member of IEC working groups for micro-grid standards. His research areas include power system planning and reliability evaluation, smart grid and complex system risk assessment.
Yonghua Song received the B.E. and Ph.D. degrees from the Chengdu University of Science and Technology, Chengdu, China, and the China Electric Power Research Institute, Beijing, China, in 1984 and 1989, respectively, all in electrical engineering. From 1989 to 1991, he was a Postdoctoral Fellow at Tsinghua University, Beijing, China. He then held various positions at Bristol University, Bristol, U.K.; Bath University, Bath, U.K.; and John Moores University, Liverpool, U.K., from 1991 to 1996. In 1997, he was a Professor of Power Systems at Brunel University, where he was a Pro-Vice Chancellor for Graduate Studies since 2004. In 2007, he took up a Pro-Vice Chancellorship and Professorship of Electrical Engineering at the University of Liverpool, Liverpool. He was a Professor at the Department of Electrical Engineering, Tsinghua University, where he was an Assistant President and the Deputy Director of the Laboratory of Low-Carbon Energy in 2009. In 2012, he became the Executive Vice- President of Zhejiang University. His current research interests include smart grid, electricity economics, and operation and control of power systems. Prof. Song was the recipient of the D.Sc. Award by Brunel University, in 2002, for his original achievements in power system research. He was elected as the Vice-President of Chinese Society for Electrical Engineering (CSEE) and appointed as the Chairman of the International Affairs Committee of the CSEE in 2009. In 2004, he was elected as a Fellow of the Royal Academy of Engineering, U.K.
Hongxun Hui is a doctoral student at the College of Electrical Engineering, Zhejiang University, China. He obtained the B.S. in electrical engineering from Zhejiang University in 2011. At present, he is a member of Smart Grid Operation and Optimization Laboratory (SGOOL). His research interests are the modeling and control of flexible loads, electricity market considering demand response, and uncertainty analysis of flexible loads.
Changzheng Shao received the B.S. degree in electric engineering from Shandong Uni-versity. He is currently pursuing the Ph.D. degree in electric engineering from Zhejiang University, Hangzhou, China. His research interests include operation and optimization of the integrated energy system, and integrated demand response.