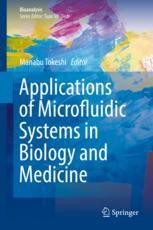 Applications of Microfluidic Systems in Biology and Medicine

Manabu Tokeshi is a professor in the Division of Applied Chemistry at Hokkaido University. He is also a visiting professor at the ImPACT Research Center for Advanced Nanobiodevices, the Innovative Research Center for Preventive Medical Engineering, and the Institute of Innovation for Future Society at Nagoya University. He received his Ph.D. degree from Kyushu University in 1997. Following his work as a research fellow of the Japan Society of Promotion of Science at The University of Tokyo, he worked at the Kanagawa Academy of Science and Technology as a research staff member (1998–1999), a group subleader (1999–2003), and a group leader (2003–2004). He also served at the Institute of Microchemistry Technology Co. Ltd. as president (2004–2005) and at Nagoya University as an associate professor (2005–2011). In 2011, Dr. Tokeshi was at the Karolinska Institutet in Sweden as a visiting researcher, after which joined Hokkaido University as a professor. His honors include the Outstanding Researcher Award on Chemistry and Micro-Nano Systems from the Society for Chemistry and Micro-Nano Systems (2007), the Pioneers in Miniaturisation Prize from the Lab on a Chip (The Royal Society of Chemistry)/Corning Inc. (2007), and the Masao Horiba Award from HORIBA, Ltd. (2011). His research interests are in the development of micro- and nano-systems for chemical, biochemical, and clinical applications.

Shoji Takeuchi, The University of Tokyo