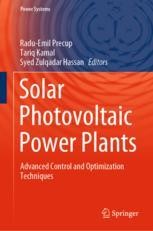 This book discusses control and optimization techniques in the broadest sense, covering new theoretical results and the applications of newly developed methods for PV systems. Going beyond classical control techniques, it promotes the use of more efficient control and optimization strategies based on linearized models and purely continuous (or discrete) models. These new strategies not only enhance the performance of the PV systems, but also decrease the cost per kilowatt-hour generated.

Radu-Emil Precup received his Dipl.Ing. degree in Automation and Computers from the Traian Vuia Polytechnic Institute of Timisoara, Romania, in 1987, his diploma in Mathematics from the West University of Timisoara in 1993, and his Ph.D. degree in Automated Systems from the Politehnica University of Timisoara in 1996, where he is currently working.  He has been an Editor-in-Chief of the International Journal of Artificial Intelligence since 2008 and also serves on the editorial boards of several other prestigious journals including Applied Soft Computing (Elsevier), Evolving Systems (Springer) and Cogent Engineering (Taylor & Francis). He is the author/coauthor of more than 300 papers published in various scientific journals, conference proceedings, and book chapters. His research interests mainly include the development and analysis of new control structures and algorithms, theory and applications of soft computing, computer-aided design of control systems, and applications to mechatronic systems (including automotive systems and mobile robots). Among other achievements, he was listed as one of the top 10 researchers in Artificial Intelligence and Automation (IIoT World July 2017).
Tariq Kamal holds doctorates in Energy and Sustainability Engineering from the University of Cadiz, Spain; and in Electrical Power and Control Engineering from Sakarya University, Turkey. His research interests include advanced intelligent control techniques for power systems; hybrid renewable energy systems; plug-in hybrid electric vehicles and their integration in power systems; distributed generation; smart grid applications; and the application of signal processing in power systems. Currently, he is working with the research group on Electrical Technologies for Sustainable and Renewable Energy, University of Cadiz, Spain. He is the author/co-author of more than 50 papers published in various international scientific journals and conference proceedings. He has been involved in major joint projects around the globe, including Spain, Turkey, Australia, China, the UK, Pakistan and Estonia, and has been a regular reviewer for many leading international journals, including IEEE Transactions on Industrial Electronics, IEEE access, and Applied Energy.
Syed Zulqadar Hassan received his Ph.D. degree in Electrical Engineering from Chongqing University, China. His research interests include fuzzy logic, neural networks, optimal control, adaptive control, integration of renewable energies, smart grids and the application of signal processing (wavelets) in power systems. He has contributed more than 45 publications in the field of Electrical Engineering, and frequently serves as a reviewer for IEEE journals and international conferences.