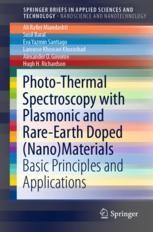 This book highlights the theoretical foundations of and experimental techniques in photothermal heating and applications involving nanoscale heat generation using gold nanostructures embedded in various media. The experimental techniques presented involve a combination of nanothermometers doped with rare-earth atoms, plasmonic heaters and near-field microscopy. The theoretical foundations are based on the Maxwell’s and heat diffusion equations. In particular, the working principle and application of AlGaN:Er3+ film, Er2O3 nanoparticles and β-NaYF4:Yb3+,Er3+ nanocrystals for nanothermometry based on Er3+ emission are discussed. The relationship between superheated liquid and bubble formation for optically excited nanostructures and the effects of the surrounding medium and solution properties on light absorption and scattering are presented. The application of Er2O3 and β-NaYF4:Yb3+,Er3+ nanocrystals to study the temperature of optically heated gold nanoparticles is also presented. In closing, the book presents a new thermal imaging technique combining near-field microscopy and Er3+ photoluminescence spectroscopy to monitor the photothermal heating and steady-state sub-diffraction local temperature of optically excited gold nanostructures.

Eva Yazmin Santiago graduated from the National Autonomous University of Mexico (UNAM) with a B.Sc. in Physics. She is currently a Ph.D. student under the supervision of Professor Alexander Govorov at the Department of Physics, Ohio University.

Alexander Govorov is a Distinguished Professor of Physics at Ohio University in the U.S. and a Chang Jiang Chair Professor at the UESTC in Chengdu, China. He is a Fellow of the American Physical Society and the recipient of several international awards including the Walton Visitor Award (Ireland), the 1000-Talent Award (Sichuan, China), the Jacques-Beaulieu Excellence Research Chair Award (Canada), etc.

Hugh Richardson received his Ph.D. degree from Oklahoma State University under the direction of Paul Devlin and subsequent postdoctoral training at Indiana University working with George Ewing. He is currently a Professor of Physical Chemistry at Ohio University.