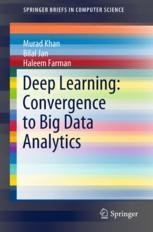 This book presents deep learning techniques, concepts, and algorithms to classify and analyze big data. Further, it offers an introductory level understanding of the new programming languages and tools used to analyze big data in real-time, such as Hadoop, SPARK, and GRAPHX. Big data analytics using traditional techniques face various challenges, such as fast, accurate and efficient processing of big data in real-time. In addition, the Internet of Things is progressively increasing in various fields, like smart cities, smart homes, and e-health. As the enormous number of connected devices generate huge amounts of data every day, we need sophisticated algorithms to deal, organize, and classify this data in less processing time and space. Similarly, existing techniques and algorithms for deep learning in big data field have several advantages thanks to the two main branches of the deep learning, i.e. convolution and deep belief networks. This book offers insights into these techniques and applications based on these two types of deep learning.

Murad Khan received a B.S. degree in Computer Science from the University of Peshawar Pakistan in 2008. He completed his Ph.D. in Computer Science and Engineering at the School of Computer Science and Engineering at Kyungpook National University, Daegu, Korea. Dr. Khan has published over 50 international conference and journal papers along with two books chapters with Springer and CRC Press. He also served as a TPC member in reputable international conferences, such as ACM SAC 2017, ICFNDS 2017, and as a reviewer for numerous journals such as Future Generation Systems (Elsevier) and IEEE Access. In 2016, he received the Kyungpook National University’s Qualcomm Innovation Award for designing a smart home control system. He was also awarded the Bronze Medal at ACM SAC 2015, Salamanca, Spain, for his work on multi-criteria based handover techniques. He is a member of various communities, including ACM and IEEE, and CRC Press. His areas of expertise include ad-hoc and wireless networks, architecture design for Internet of Things, and communication protocol design for smart cities and homes, big data analytics, etc.

Bilal Jan received his M.S. and Ph.D. degrees from the Department of Control and Computer Engineering (DAUIN) Politecnico di Torino, Italy, in 2010 and 2015 respectively. He has published several papers in reputed journals and conferences. He is currently working as Assistant Professor and Head of the Department of Computer Science, FATA University, Darra Adam Khel, FR Kohat, Pakistan. He is a reviewer for numerous leading journals. His research interests include general purpose programming in GPUs, high-performance computing, wireless sensor networks, Internet of things (IoT), deep learning and big data.

Haleem Farman received his M.S. degree from the International Islamic University, Islamabad, Pakistan in 2008. He is currently pursuing his Ph.D. degree in Computer Science at the Department of Computer Science, University of Peshawar, Pakistan, and working as a lecturer at the Department of Computer Science, Islamia College Peshawar, Pakistan. He has authored/co-authored more than 20 research papers in respected journals and conferences. In addition, he serves as an invited reviewer for several journals, such as Elsevier Sustainable Cities and Society. His fields of interest include wireless sensor networks, Internet of Things, big data analytics, privacy, optimization techniques and quality of service issues in wireless networks.