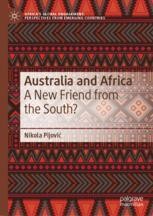 A New Friend from the South?

Australia has presented itself as Africa’s ‘friend from the south,’ without any colonial baggage, and is interested in a long-term partnership for trade and development. In this context, Australia is only one of many ‘new’ players seeking more intensive engagement with Africa since the end of the Cold War. At its core, the book argues that because of its largely unacknowledged ‘flawed’ historical engagement with Africa, as well as the political partisanship driving its fickle and volatile contemporary engagement with the continent, Australia suffers from an inability to assess its strategic and long-term interests – i.e., it doesn’t know what it wants in or from Africa. This makes Australia a rather unique emerging player in Africa: while other 'new' actors' engagement with Africa is generally strategic, and driven to a large extent by a desire to secure resources and counter the influence of geopolitical rivals, Australia’s efforts with regard to Africa are more episodic and not about acquiring resources or countering its rivals. Hence, while immigration, globalization, trade, terrorism, and climate change continue to bring Africa and Australia closer together, Australia’s failure to understand its own interests continues to hamper its engagement with Africa.
Show all
About the authors

Dr Nikola Pijović is a Research Fellow at the Africa Research and Engagement Centre (AfREC), University of Western Australia. He specializes in Australian foreign policy, and is a leading authority on Australia’s engagement with Africa, having published academic and media articles on Australia and Africa, as well as providing submissions to the Australian Parliament on the country’s relations with African states. Dr Pijović’s research also focuses on comparative foreign policy-making in two-party political systems, and especially the distinctions between ‘core’ and ‘peripheral’ foreign policy. He has also published extensively on statehood, insurgency, and terrorism in Somalia and Somaliland.

“Australia may not know what it wants in Africa, but Nikola Pijovic knows that Africa needs to be on the Australian political map, even if it is not a central pillar to its foreign policy engagement.  Pijovic’s thorough, insightful and in-depth research has captured, in one volume, the complete history of Australia's engagement with Africa.  This book is a brilliantly crafted and unique contribution to understanding the political significance of Australian-African relations.” (Dr. Tanya Lyons, Editor of the Australasian Review of African Studies and former President of the African Studies Association of Australasia and the Pacific.)“Australia is an important ‘emerging engager’ in Africa, with a distinctive history and profile. This well-written, empirically-based book shows the importance of both domestic politics and ideas in Australia’s African engagements. As such it makes a very valuable addition to the literature on foreign power interest in Africa.” (Dr. Pádraig Carmody, Trinity College Dublin and the University of Johannesburg, and author of The New Scramble for Africa)

“A comprehensive examination of Australia’s ambivalent and inconsistent engagement with sub-Saharan Africa, this book makes an important contribution to the scholarship on Australia’s foreign relations. Provocative and carefully argued, it looks at Australia-Africa relations from the inside and outside. It examines the drivers, inhibitors and prejudices that have shaped Australia’s approach to the continent; as well as comparing the results of Australia’s record with those of other new engagers with Africa.” (Professor Michael Wesley, Dean, College of Asia and the Pacific, Australian National University)