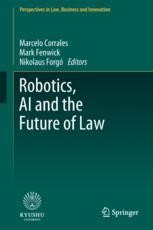 Robotics, AI and the Future of Law

Artificial intelligence and related technologies are changing both the law and the legal profession. In particular, technological advances in fields ranging from machine learning to more advanced robots, including sensors, virtual realities, algorithms, bots, drones, self-driving cars, and more sophisticated “human-like” robots are creating new and previously unimagined challenges for regulators. These advances also give rise to new opportunities for legal professionals to make efficiency gains in the delivery of legal services. With the exponential growth of such technologies, radical disruption seems likely to accelerate in the near future.

This collection brings together a series of contributions by leading scholars in the newly emerging field of artificial intelligence, robotics, and the law. The aim of the book is to enrich legal debates on the social meaning and impact of this type of technology.

The distinctive feature of the contributions presented in this edition is that they address the impact of these technological developments in a number of different fields of law and from the perspective of diverse jurisdictions. Moreover, the authors utilize insights from multiple related disciplines, in particular social theory and philosophy, in order to better understand and address the legal challenges created by AI. Therefore, the book will contribute to interdisciplinary debates on disruptive new AI technologies and the law.

​Editors
Marcelo Corrales is an attorney-at-law specializing in intellectual property, information technology, and corporate law. He is also a professor and currently works as director of innovation and research at the Universidad Politécnica y Artística del Paraguay (UPAP). He has a Doctor of Laws (LL.D.) degree from Kyushu University in Japan. He also holds a Master of Laws (LL.M.) in international economics and business law from Kyushu University, and an LL.M. in law and information technology and an LL.M. in European intellectual property law, both from the University of Stockholm in Sweden. His most recent publications include New Technology, Big Data and the Law (Springer, 2017). Dr. Corrales’s past activities have included being a research associate with the Institute for Legal Informatics and IT Law at Leibniz Universität Hannover (Germany) from 2007 to 2018.

Nikolaus Forgó studied law at University of Vienna and Université Paris II Pantheon-Assass (Mag. iur 1990, Dr. iur. 1997). From 2000 to 2017 he was full professor of legal informatics and IT law at Leibniz Universität Hannover (Germany), and between 2013 and 2017 he also served as data protection officer and chief information officer of this university. He was appointed as full professor of law at the University of Vienna in October 2017 and has been head of the newly founded Department of Innovation and Digitalization of Law since then. He teaches and consults in all fields of IT law, legal informatics, civil law, and legal theory and has been responsible for more than 50 research projects, including more than 20 EU research projects.

“Scholars interested in legal-philosophical aspects of emerging technologies or researching privacy regulations likely would find relevant material in this book. This book is recommended for academic collections, especially those with a European law and/or robotics focus.” (Sara Bensley, Law Library Journal, Vol. 112 (1), 2020)