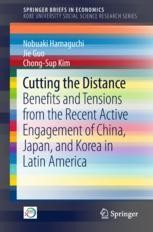 Benefits and Tensions from the Recent Active Engagement of China, Japan, and Korea in Latin America

This book represents a valuable contribution to the study of Asia–Latin America relations from the unprecedented collaboration of leading Latin American specialists of China, Japan, and Korea, representing views from their respective countries. The academic literature on this topic remains quite limited in spite of rapid expansion of the interregional trade and investment and active engagements to institutionalize relationships in recent years. Especially, the views from Asian academic researchers have not been expressed often. This book reveals why the partnership between the two geographically distant regions has gained more importance recently. The authors also discuss some tensions arising from the intensifying relationship, including the concentration in a few commodities of Latin American exports and the competition of Latin American industry with Asian exports, as well as geopolitical problems.

Nobuaki Hamaguchi is a professor at the Research Institute for Economics and Business Administration of Kobe University. He holds Ph.D. degree in Regional Science from the University of Pennsylvania. His research interests are in Latin American economy, economic integration in Asia-Pacific, and regional economic/industrial policies in Japan. He was a former president of Japan Society of Social Science on Latin America. As a program director and a faculty fellow of Japan’s Research Institute of Economy, Trade and Industry (RIETI), he organizes a research project on Japan’s regional economies.

Jie Guo is an associate professor at the School of International Studies, Peking University. Her research focuses mainly on Latin American politics and diplomacy, China-Latin America relations. Guo’s publications include four monographs and around forty academic articles. The most recent include China’s Agricultural Engagement with Latin America, “Continuous Cycle of Political ‘Carnival’?: Reflections on Populism in Latin America”, etc. Guo holds a PhD in law from the Peking University. From 2013 to 2016, she worked as Chinese fellow and visiting scholar with institutions such as the Kettering Foundation (US), Inter-American Dialogue (US), Universidad del Pacífico (Peru), Universidade de São Paulo (Brazil), Universidad de Buenos Aires (Argentina), Colegio de México (Mexico).

Chong-Sup Kim is professor at Graduate School of International Studies, Seoul National University, since 2003. He received his B.A. in economics from Seoul National University and Ph.D. in economics from the University of Chicago. He was professor at Sogang University (1997-2003) and Instituto Tecnologico Automono de Mexico (1991-1997). He worked as advisor in the Energy Regulatory Commission in Mexico (1992-1994). He has also served as the Director of Privatizations in the Secretary of Finance in Mexico (1995-1996). Chong-Sup Kim is an economist whose research focuses on international and development economics. He has conducted a lot of research on NAFTA from the Mexican standpoint. He was president of Latin American Studies Association of Korea (2014-2017).