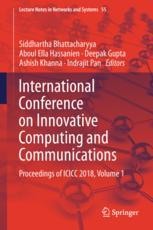 The book includes high-quality research papers presented at the International Conference on Innovative Computing and Communication (ICICC 2018), which was held at the Guru Nanak Institute of Management (GNIM), Delhi, India on 5–6 May 2018. Introducing the innovative works of scientists, professors, research scholars, students and industrial experts in the field of computing and communication, the book promotes the transformation of fundamental research into institutional and industrialized research and the conversion of applied exploration into real-time applications.

Siddhartha Bhattacharyya did his Bachelors in Physics and Optics and Optoelectronics and Masters in Optics and Optoelectronics from University of Calcutta, India in 1995, 1998 and 2000, respectively. He completed his Ph.D. in Computer Science and Engineering from Jadavpur University, India in 2008. He is currently the Principal of RCC Institute of Information Technology, Kolkata, India. In addition, he is also serving as the Professor of Computer Application and Dean (Research and Development and Academic Affairs) of the institute. He is a co-author of 4 books and the co-editor of 20 books and has more than 200 research publications in international journals and conference proceedings to his credit.

Aboul Ella Hassanien (Abo) received his B.Sc. with honours in 1986 and M.Sc. degree in 1993, both from Ain Shams University, Faculty of Science, Pure Mathematics and Computer Science Department, Cairo, Egypt. On September 1998, he received his doctoral degree from the Department of Computer Science, Graduate School of Science & Engineering, Tokyo Institute of Technology, Japan. He is a Full Professor at Cairo University, Faculty of Computer and Information, IT Department. Professor Aboul Ella is the founder and chair of the scientific research group in Egypt. He has authored over 380 research publications in peer-reviewed reputed journals, book chapters and conference proceedings.

Deepak Gupta received his Ph.D. in Computer Science and Engineering from Dr. APJ Abdul Kalam Technical University (AKTU), Master of Engineering (CTA) from Delhi University, and B.Tech. (IT) from GGSIP University in 2017, 2010 and 2005 respectively. He is a postdoc research fellow in Internet of Things Lab at Inatel, Brazil. He is currently working as Assistant Professor in Department of Computer Science and Engineering, Maharaja Agrasen Institute of Technology, GGSIP University, Delhi, India. He has 31 publications in reputed International Journals and Conferences. In addition he has authored/edited 29 books with international publishers.

Dr. Ashish Khanna received his Ph.D. degree from National Institute of Technology, Kurukshetra in March 2017. He has completed his M.Tech. in 2009 and B.Tech. from GGSIPU, Delhi in 2004. He is a postdoc fellow in Internet of Things Lab at Inatel, Brazil. He has published around 33 research papers and book chapters in reputed journals and conferences. He has also authored and edited 11 books of some of the advanced engineering courses like Distributed Systems, Java Programming, Computer Graphics and many more.

Indrajit Pan has done his Bachelor of Engineering (BE) in CSE from University of Burdwan in 2005 and Master of Technology (M.Tech.) in IT from Bengal Engineering and Science University, Shibpur in 2009 and stood first to receive University Medal. Indrajit obtained Ph.D. in Engineering from Department of Information Technology, Indian Institute of Engineering Science and Technology, Shibpur in 2015. Presently he is serving there as Associate Professor of IT. In addition to this, Indrajit is the Program Coordinator of B.Tech. (IT). Indrajit has a number of research publications in different International journals and conferences. He has also co-authored a couple of book chapters and edited research volumes with prestigious publishers like Wiley, Taylor and Francis as well as research proceedings.