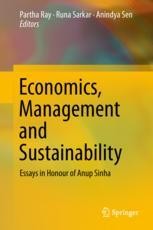 Essays in Honour of Anup Sinha

This book presents an eclectic mix of interesting new areas in the domain of economics, management and sustainability. Written by leading experts, it provides valuable food for thought, with essays introducing new lines of research and empirical research papers offering sound research methodology. The book not only provides answers, but also raises numerous interesting questions concerning the areas covered to whet readers’ appetites to learn more.
Professor Anup Sinha is a respected teacher and is a great mind with wide-ranging academic interests spanning from economics and sustainability to management. As well as in various other places in India and the US, he has taught at the Indian Institute of Management Calcutta and Presidency College (now a University) Calcutta for almost three decades. To commemorate his contributions, this festschrift presents a collection of essays that are broadly subdivided into four sections: Economic Development; Vulnerabilities and Inclusive Growth; Sustainability and Corporate Governance; and Innovation and Management.

Partha Ray is currently Professor of Economics at the Indian Institute of Management Calcutta. During 2007 – 2011 he was an Adviser to Executive Director (India) at the International Monetary Fund, Washington D.C. Earlier he was working in the specialist cadre of Economists in Reserve Bank of India’s Economic Research Department for nearly 16 years in various capacities; his last position was Director, Financial Markets Division. Educated in Calcutta, Mumbai and Oxford, Ray has published extensively on macroeconomics, monetary policy and global financial crisis. His recent publications include: Financial and Fiscal Policies: Crises and New Realities (with Y V Reddy and Narayan Valluri, 2014); Monetary Policy: Oxford India Short Introduction (2013), The Global Economic Crisis through an Indian Looking Glass (with A Kishore and M D Patra, 2011). Runa Sarkar is Professor of Economics, and Dean (Academic), Indian Institute of Management Calcutta. Prior to this, she taught at the Indian Institute of Technology Kanpur. She, along with Anup Sinha is the co-author of two books, one titled Another Development: Participation, Empowerment and Well-being, and the other titled Economics of Sustainable Development. Sarkar has been one of the co-editors of the India Infrastructure Report, 2010 and 2009. Her latest book titled Environment, Business, Institutions was published in 2017. She has also co-edited another book, titled Essays on Sustainability and Management: Emerging Perspectives. Her areas of interest are corporate sustainability and the application of social informatics in agriculture. She is currently chairperson of Ctran Consulting, and is on the board of two other companies of the BASIX group. Anindya Sen is Professor of Economics at Indian Institute of Management Calcutta. He was earlier Visiting Professor at School of Business and Management, American University of Armenia and at Department of Economics, University of Notre Dame, USA. He was also Professor at Indira Gandhi Institute of Development Research, Mumbai. He has earlier held the positions of Dean (Programme Initiatives) and Dean (Academic) at IIM Calcutta and Dean at IGIDR Mumbai. He was the Director in-charge of IIM Ranchi from November 2014 to February 2017. He holds a Ph. D from University of Southern California, USA. His fields of interest are: Industrial Organization, Theory of the Firm, Regulation, Law and Economics and Strategic Management. He has authored and edited several volumes. He has been General Editor for a cluster of books on Economics and Development in the Oxford India Short Introduction series. Currently, he is editing two series for Routledge. He has published in both Indian and international journals and contributed chapters to a number of volumes.