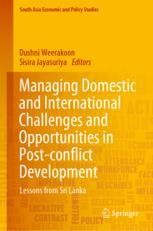 Managing Domestic and International Challenges and Opportunities in Post-conflict Development

This book draws lessons from the story of Sri Lanka’s post-conflict development in the context of a struggle for socio-political reconciliation, a turbulent world economy, and difficult internal and external political challenges. Heightened volatility in the global economy and intensifying geopolitical rivalries pose complex policy challenges for small countries embarking on post-conflict daunting challenges. To sustain peace, development needed to be broad based and inclusive. It needed to rapidly reconstruct war-devastated regions, restore macroeconomic stability, while delivering a ‘peace dividend’. The book contains contributions that highlight Sri Lanka’s endeavours of coping with adverse shocks, while exploiting new opportunities.  It showcases how the island country had to attract capital and assistance, and support of the international community, including that of the rising Asian giants – China and India. Addressing the post-conflict challenges of sourcing development finance in a new global financial and political landscape, the book would be of interest to researchers working on post-conflict development in the context of a volatile global economy and changing aid architecture, and would also act as an important resource for policy makers.

Dushni Weerakoon is the Executive Director of the Institute of Policy Studies of Sri Lanka (IPS). Her research and publications chiefly focus on regional trade integration, macroeconomic policy, and international economics. She has extensive experience in economic policy formulation, serving as a member of the Macro and Trade Policy Steering Committee of the Ministry of Policy Development and Implementation (2002–2004), an official delegate to the Committee of Experts to negotiate the South Asian Free Trade Agreement under the Ministry of Trade and Commerce (2004–2005) and member of the Trade and Tariff Committee of the National Council for Economic Development (NCED) of the Ministry of Finance (2004–2010), amongst others. She holds a BSc in Economics from the Queen’s University of Belfast, UK, and an MA and PhD in Economics from the University of Manchester, UK.