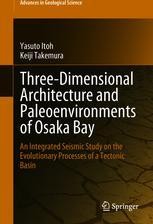 This publication shows the three-dimensional configuration of the gigantic tectonic sag of the Osaka Bay sedimentary basin on the eastern Eurasian margin based on reflection seismic data never before published. The basin has developed relatively quickly since the dawn of the Quaternary. High-resolution subsurface images on the profiles provide highly valuable information about the architecture of active faults, paleoenvironmental changes, and mass balance on the convergent margin. The book presents an excellent case study of a tectonically controlled basin because morphologies and evolutionary processes of such basins show an enormous diversity, reflecting spatiotemporal variation in tectonic stress. Furthermore, this volume provides insight into the general mechanism of sedimentary basin formation.

The quantitative analyses contained here will be thought-provoking for industry experts, academics, and graduate and undergraduate students engaged in geologic survey and civil engineering. The contents will be especially useful to professionals in the fields of Quaternary geology, neotectonics, and active fault research.

Yasuto Itoh was awarded his M.Sc. and Ph.D. in geophysics from Kyoto University and now is a professor in the Graduate School of Science of Osaka Prefecture University. He conducts research into tectonics, stratigraphy, paleomagnetism, and geophysical/geochemical modeling of convergent margins, and has published more than 100 papers in the field of back-arc opening processes, the deformation mode of active plate margins, quantitative assessment of active faults, the paleoenvironment of East Asia, and the mechanism of sedimentary basin formation. His professional memberships include the American Geophysical Union, the American Association of Petroleum Geologists, the Japan Geoscience Union, and the Japanese Association for Petroleum Technology. He is also a member of the Integrated Research Project for Active Tectonics of the Ministry of Education, Culture, Sports, Science and Technology (MEXT), Japan.

Keiji Takemura received a Ph.D. in geological science at Kyoto University. He now is a professor at the Institute for Geothermal Sciences, Kyoto University. He conducts research into stratigraphy, active tectonics, tephrochronology, and geothermal sciences, and has published more than 300 papers (half of them in English) in the field of Quaternary sciences of active faults, paleogeography, and the tectonic history of southwest Japan, environmental changes from lake and bay sediments, geothermal geology, soil engineering, and geoarchaeology. His professional memberships include the American Geophysical Union, the Japan Geoscience Union, the Japanese Association for Quaternary Sciences, and the Geological Society of Japan. He is also a leader of one of the programs of the Integrated Research Project for Active Fault Systems of the Ministry of Education, Culture, Sports, Science and Technology (MEXT), Japan.
Show all