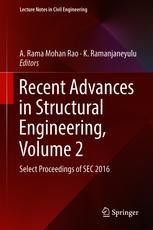 Dr A. Rama Mohan Rao obtained his doctoral degree on high-performance computing techniques for nonlinear dynamic analysis from the Indian Institute of Science, Bangalore. He joined CSIR-SERC, Chennai as a scientist in 1989 (after working nearly for a decade in the design and construction sector) and rose to the position of chief scientist. Currently, he heads the Structural Health Monitoring Laboratory at CSIR-SERC. He is also a professor at the Academy of Scientific and Innovative Research (AcSIR) and has taught several advanced courses for M.Tech., and PhD., students. He was co-editor of the Journal of Structural Engineering from 2004–2007, and was an editorial board member for all the International Conferences on Parallel, Distributed, Grid and Grid Computing for Engineering (PARENG 2009 to 2017) held in various European locations between 2009 and 2017. His research interests include computational structural mechanics; high-performance computing; structural system identification, control and health monitoring; nature-inspired computing, systems engineering; and combinatorial optimization. He has authored more than 85 peer-reviewed papers spread over 52 journals, as well as several conference papers and technical reports related to sponsored research and consultancy projects. He is a life member of several professional bodies, and was awarded a UNDP fellowship for the year 1994–1995. He was a member of the team that won the CSIR-Technology prize in 1999 for scientific contributions to the development of advanced computational methodologies, modelling techniques and software for analysis and design of complex structures. He was also received an award for “excellence in high-performance cluster computing” from Sun Microsystems in February 2004. He was also a visiting research scientist at the University of Berkeley, California, USA, Cornell University, Ithaca, USA and University College of Wales, Swansea, UK in 1994–1995.

Dr K. Ramanjaneyulu graduated from the Regional Engineering College, Warangal (now NIT, Warangal),  and obtained his postgraduate degree in structural engineering from the Indian Institute of Science, Bangalore. He obtained his doctoral degree in structural engineering on stability behaviour of wind loaded natural draught cooling tower shells from the Indian Institute of Technology Madras in 1992. He joined the Structural Engineering Research Centre, Madras as a scientist in 1989 and risen to the position of chief scientist. He currently heads the Advanced Concrete Testing & Evaluation Laboratory (ACTEL), at CSIR-SERC. He is also a professor at the Academy of Scientific and Innovative Research (AcSIR). His research interests include the behaviour of reinforced concrete structures; analysis and design of special structures such as bridges and cooling tower shells; blast resistant design of structures; nonlinear finite element analysis of reinforced concrete plate and shell structures; and structural health assessment and management of bridges. He has published over 80 papers in refereed national/international journals, and over 100 papers at international and national conferences/seminars.