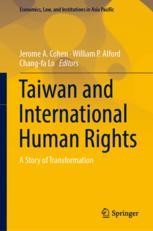 A Story of Transformation

This book tells a story of Taiwan’s transformation from an authoritarian regime to a democratic system where human rights are protected as required by international human rights treaties. There were difficult times for human rights protection during the martial law era; however, there has also been remarkable transformation progress in human rights protection thereafter. The book reflects the transformation in Taiwan and elaborates whether or not it is facilitated or hampered by its Confucian tradition. There are a number of institutional arrangements, including the Constitutional Court, the Control Yuan, and the yet-to-be-created National Human Rights Commission, which could play or have already played certain key roles in human rights protections. Taiwan’s voluntarily acceptance of human rights treaties through its implementation legislation and through the Constitutional Court’s introduction of such treaties into its constitutional interpretation are also fully expounded in the book. Taiwan’s NGOs are very active and have played critical roles in enhancing human rights practices. In the areas of civil and political rights, difficult human rights issues concerning the death penalty remain unresolved. But regarding the rights and freedoms in the spheres of personal liberty, expression, privacy, and fair trial (including lay participation in criminal trials), there are in-depth discussions on the respective developments in Taiwan that readers will find interesting. In the areas of economic, social, and cultural rights, the focuses of the book are on the achievements as well as the problems in the realization of the rights to health, a clean environment, adequate housing, and food. The protections of vulnerable groups, including indigenous people, women, LGBT (lesbian, gay, bisexual, and transgender) individuals, the disabled, and foreigners in Taiwan, are also the areas where Taiwan has made recognizable achievements, but still encounters problems. The comprehensive coverage of this book should be able to give readers a well-rounded picture of Taiwan’s human rights performance. Readers will find appealing the story of the effort to achieve high standards of human rights protection in a jurisdiction barred from joining international human rights conventions.

Editors
Jerome A. Cohen is professor at NYU School of Law since 1990 and Faculty Director of its U.S.-Asia Law Institute, is a leading American expert on Chinese law and government. A pioneer in the field, Prof. Cohen began studying and teaching about China’s legal system in the early 1960s and from 1964 to 1979 introduced the teaching of Asian law into the curriculum of Harvard Law School, where he served as Jeremiah Smith Professor, Associate Dean and Director of East Asian Legal Studies. In addition to his responsibilities at NYU, Prof. Cohen served for several years as C.V. Starr Senior Fellow and Director of Asia Studies at the Council on Foreign Relations, where he currently is an Adjunct Senior Fellow. He retired from the partnership of Paul, Weiss, Rifkind, Wharton & Garrison LLP at the end of 2000 after twenty years of law practice focused on China. In his law practice, Prof. Cohen represented many companies and individuals in contract negotiations as well as in dispute resolution in China. Prof. Cohen has published several books on Chinese law, including The Criminal Process in the People’s Republic of China, 1949–63 (Harvard University Press. 1968), People’s China and International Law (With Hungdah Chiu. Princeton University Press. 1974), Contract Laws of the People’s Republic of China (with Yvonne Y. F. Chan and Ho Yuk Ming. Longman Group. 1988) and Challenge to China: How Taiwan Abolished Its Version of Re-Education Through Labor (with Margaret K. Lewis. Berkshire Publishing. 2013). In addition, he has published hundreds of scholarly articles on various topics as well as a book, China Today, co-authored with his wife, Joan Lebold Cohen, and a regular series of journalistic opinion pieces for various newspapers. Today, Prof. Cohen continues his research and writing on Asian law, specifically focusing on legal institutions, criminal justice reform, dispute resolution, human rights and the role of international law relating to China and Taiwan.


William P. Alford is Henry L. Stimson Professor at Harvard Law School where he also serves as Vice Dean for the Graduate Program and International Legal Studies, Director of East Asian Legal Studies and Chair of the Harvard Law School Project on Disability.  A scholar of Chinese law and society, his books include To Steal a Book is an Elegant Offense: Intellectual Property Law in Chinese Civilization (Stanford 1995); Raising the Bar: The Emerging Legal Profession in East Asia (Harvard 2007), Can ji ren fa lu bao zhang ji zhi yan jiu (A Study of Legal Mechanisms to Protect Persons with Disabilities) (Huaxia 2008, with Wang Liming and Ma Yu’er, in Chinese), and Prospects for the Professions in China (Routledge 2011, with William Kirby and Kenneth Winston). In addition, he has published dozens of articles concerning China, law and international affairs. Professor Alford’s work has been recognized with an honorary doctorate by the University of Geneva in 2010 and honorary professorships at Renmin University of China and Zhejiang University. He is also the recipient of the inaugural O’Melveny & Myers Centennial Award, the Kluwer China Prize, a Qatar Pearls of Praise Award, an Abe (Japan) Fellowship, the Harvard Law School Alumni Association Award, an award from Special Olympics International recognizing his work on behalf of persons with intellectual disabilities, and several other fellowships and honors.  He is a graduate of Amherst College (B.A.), the University of Cambridge (LL.B.), Yale University (M.A. in History and M.A. in Chinese Studies) and Harvard Law School (J.D.).

Chang-fa Lo has been Justice of the Constitutional Court of the ROC (Taiwan) since October 2011. Prior to his current judicial position, he was the Chair Professor and Lifetime Distinguished Professor at National Taiwan University (NTU); Dean of NTU College of Law; Founding Director of Asian Center for WTO and International Health Law and Policy of NTU College of Law (ACWH); Founding Director of Center for Ethics, Law and Society in Biomedicine and Technology of NTU; Commissioner of Taiwan’s Fair Trade Commission; Commissioner of Taiwan’s International Trade Commission; and legal advisor for Taiwan’s GATT/WTO accession negotiations. In his capacity as the Director of ACWH, Professor Lo launched two English journals, namely, the Asian Journal of WTO and International Health Law and Policy (AJWH, an SSCI listed journal) and the Contemporary Asia Arbitration Journal (CAA) in 2006 and 2008, respectively. In his tenure as Dean of NTU College of Law, he also launched an English journal, the NTU Law Review. He was appointed by the WTO as a panelist for DS332 Brazil—Measures Affecting Imports of Retreaded Tyre in 2006, DS468 Ukraine—Definitive Safeguard Measures on Certain Passenger Cars in 2014, and appointed as a member of the Permanent Group of Experts under the SCM Agreement of WTO in 2008. He is also the chairman of the Asia WTO Research Network (AWRN) since 2013. Prior to his teaching career, he practiced law in Taipei. He received his SJD degree from Harvard University Law School in 1989. He is the author of 13 books (including “Treaty Interpretation under the Vienna Convention on the Law of Treaties—A New Round of Codification” published by Springer) and the editor of 7 books (including this one), and has authored more than 100 journal papers and book chapters. He was granted the “National Professorship Award” by the Ministry of Education and the “Outstanding Scholarship Chair Professorship Award” by the Foundation for Advancement of Outstanding Scholarship.