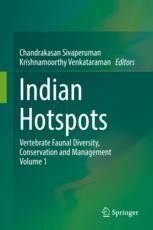 This book offers a comprehensive account of India’s four biodiversity hotspots: the Himalaya, Indo-Burma, Western Ghats and Sri Lanka and Andaman and Nicobar Islands. With a focus on tropical rainforests, it includes more than 30 chapters covering different vertebrate fauna e.g. fishes, amphibians, reptiles, birds, and mammals, as well as topics such as conservation and management aspects.

Written by experts in the field of biodiversity conservation and management, it offers ample new insights into a number of subjects related to the faunal communities of tropical forest ecosystems, providing a valuable resource for conservationists and researchers in the field of flora and fauna diversity.

Dr. C. Sivaperuman, is currently a Scientist-D at the Zoological Survey of India, Port Blair. He received his master’s degree in wildlife biology from Bharathidasan University, Tamil Nadu, and his doctorate degree in ecology of wetland birds in the Vembanad-Kole Ramsar site from the Kerala Forest Research Institute, Kerala, and Forest Research Institute, Deemed University, Dehra Dun. He has been extensively involved in field surveys in different parts of the country. He has published more than 200 research papers in national and international journals and newsletters. He also authored/edited more than 25 books published by respected national and international publishers. He has participated in 36th Indian Scientific Expedition to Antarctica during 2016-2017 and carried out studies on the species abundance and distribution of birds and mammals in Antarctica. He has participated and presented research papers at 60 national and international seminars and symposia. He is life member of various scientific societies in India and abroad.

His research areas include coastal and marine biodiversity assessment, coral reef restoration, integrated management of coastal, marine and wetland ecosystems, biodiversity laws and policies. He is an expert on strategy formulation, climate change resilience in management of marine ecosystem, meiofaunal assemblage in Antarctic ecosystem, and training and organizing awareness programmes on faunal resources conservation. He has 37 years of research experience in faunal diversity studies, and has served at Madurai Kamaraj University, Bombay Natural History Society (BNHS), National Biodiversity Authority, Loss of Ecology Authority and the Zoological Survey of India (ZSI) in various capacities.

He was the director of the Zoological Survey of India from 2010 to 2015. At BNHS he worked with internationally renowned Ornithologist, Dr. Salim Ali, in the Management of Keoladeo National Park, Bharatpur, Rajasthan. He has contributed over 458 publications in the field of marine, wetland, terrestrial and freshwater ecosystems, of which 41 have been published as books. He is a member of the editorial board of leading scientific journals in India and has reviewed several articles for internationally respected journals and various Government of India committees. He has participated in over 500 national and 50 international meetings, chairing sessions and panel discussions and delivering lead talks.

He was the founder member secretary of the National Biodiversity Authority of the Ministry of Environment, Forests and Climate Change, Government of India, and coordinated the implementation of the thematic National Biodiversity Strategy Action Plan, and the action plan for biophysical monitoring of coral reefs in Andaman and Nicobar Islands and Gulf of Mannar Biosphere Reserve. His input and involvement in the enactment and implementation of Biological Diversity Act, 2002 and establishment of State Biodiversity Boards are worth mentioning.