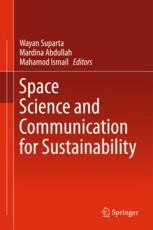 Space Science and Communication for Sustainability

This book addresses space science and communication – one of the main pillars of space science sustainability, an area that has recently become of great importance. In this regard, research and development play a crucial role in sustainability development. However, obtaining essential data in the physical world to interpret the universe and to predict what could happen in the future is a challenging undertaking. Accordingly, providing valid information to understand trends, evaluate needs, and create sustainable development policies and programs in the best interest of all the people is indispensable.

This book was prepared in conjunction with the fifth meeting of the 2017 International Conference on Space Science and Communication (IconSpace2017), held in Kuala Lumpur, Malaysia on 3-5 May 2017 to introduce graduate stuandents, researchers, lecturers, engineers, geospatialists, meteorologists, climatologists, astronomers and practitioners to the latest applications of space science, telecommunications, meteorology, remote sensing and related fields. The individual papers discuss a broad range of space science and technology applications, e.g. the formation of global warming from space, environmental and remote sensing, communication systems, and smart materials for space applications.
Show all
About the authors

Wayan Suparta received his PhD in Electrical, Electronic and Systems Engineering from the Faculty of Engineering, Universiti Kebangsaan Malaysia (UKM). He was appointed as a senior lecturer (July 2008 - March 2012) and an associate professor (April 2012 - March 2017) at the Space Science Centre (ANGKASA), Institute of Climate Change, UKM. He is currently working as an SciTech and Education Consultant at the private company. His research interests involve Space Meteorology, Artificial Neural Network Applications and Communications (Remote Sensing). He has had frequent collaborations with academic centers such as the National Institute of Polar Research (NIPR) Japan, Science Institute of University of Iceland, the University of Canterbury New Zealand, and the Instituto Antártico Argentino (IAA). The results of his scientific research have been published in over 100 articles, four book chapters, and three books.

Mardina Abdullah is a Professor at