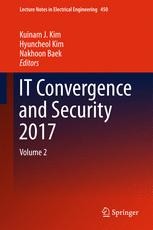 IT Convergence and Security 2017

This is the second volume of proceedings including selected papers from the International Conference on IT Convergence and Security (ICITCS) 2017, presenting a snapshot of the latest issues encountered in the field. It explores how IT convergence and security issues are core to most current research, industrial and commercial activities and consists of contributions covering topics including machine learning & deep learning, communication and signal processing, computer vision and applications, future network technology, artificial intelligence and robotics.

Kuinam J. Kim is a professor and chairman of the Convergence Security Department at Kyonggi University, Korea. He is the founding editor-in-chief of Software Networking and the Journal of Industrial Engineering and Management Science. He is currently on the advisory editorial board of the Convergence Security Journal. His research interests include cloud computing, wireless and mobile computing, digital forensics, video surveillance, information and convergence security. He has published extensively in these areas and received several jou

rnal and conference best paper awards. He received his BS degree in Mathematics from the University of Kansas. He earned his Ph.D. in Industrial Engineering from Colorado State University in 1994. He is the executive general chair of the Institute of Creative and Advanced Technology, Science, Engineering (ICATSE). He is a senior member of the IEEE.

Nakhoon Baek is currently a professor at the School of Computer Science and Engineering at Kyungpook National University, Korea. He received his BA, MS and Ph.D. degrees in

Computer Science from Korea Advanced Institute of Science and Technology (KAIST) in 1990, 1992 and 1997, respectively. His research interests include graphics standards, graphics algorithms and real-time rendering. He is now also the chief engineer of Dassomey.com Inc., Korea.

He is a professor in the Department of Computer Science at Nam Seoul University, Korea. He is the Associate Editor of Software Networking Journal. He received his BS, MS, and Ph.D. degrees in Computer Engineering from Sungkyunkwan Univer