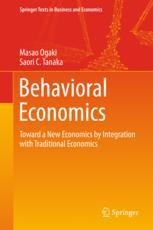 Toward a New Economics by Integration with Traditional Economics

Masao Ogaki is a professor at the Faculty of Economics, Keio University.  He graduated from the Department of Economics at Osaka University, Japan, in 1982. In 1988, he obtained his Ph.D. at the University of Chicago. He then taught at the University of Rochester and Ohio State University before joining the faculty of Keio University in 2009. He served as president of the Association of Behavioral Economics and Finance, November 2015 to December 2017), was editor of the Japanese Economic Review (August 2011 to January 2016), and editor of the Journal of Money, Credit, and Banking (September 2003 to August 2009).

Saori C. Tanaka is the head of the Department of Neural Computation for Decision-Making of the ATR Brain Information Communication Research Laboratory Group, Kyoto, Japan. She graduated from the Department of Physics at Osaka University, Japan, in 2001. In 2006, she completed her Ph.D. at the Nara Institute of Science and Technology, Graduate School of Information Science, Japan. She then worked as a visiting researcher at the California Institute of Technology and an associate professor at the Institute of Social and Economic Research, Osaka University, Japan. Her field of expertise is the study of the brain mechanism of decision making by using noninvasive human brain function measurement and computational theory of decision making.
Show all
Reviews

“This book does an excellent job putting compact, clear descriptions of basic microeconomic theory side-by-side with new results in neuroeconomics. It offers a smorgasboard of short discussions in a very wide range of topics, including newer concepts such as identity, well-being and behavioral welfare economics. Readers eager to get a small taste of these fascinating topics will be well-fed by this book.” (Colin F. Camerer, Robert Kirby Professor of Behavioral Economics, California Institute of Technology, USA)
“In this unique, thought-provoking textbook, Masao Ogaki and Saori C. Tanaka successfully bridge the gap between the neoclassical economics paradigm and behavioral economics. They clarify neuroscientific foundations for the underlying factors of behavioral economics and strongly stimulate economists’ curiosity by raising serious doubts about utilitarian welfarism for the allocative efficiency criterion. Readers will deepen their understanding of why behavioral economics works as it does. ” (Shinsuke Ikeda, Professor of Economics, The Institute of Social and Economic Research, Osaka University, Japan)