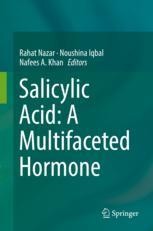 This book provides an overview of current knowledge, ideas and trends in the field of induced acclimation of plants to environmental challenges. Presenting recent advances in our understanding of the importance of salicylic acid, it paves the way for deciphering the precise role of salicylic acid in the field of plant physiology, biochemistry and agronomy, and breeding stress-tolerant and high-yielding sustainable transgenic crops. Adopting a mechanistic approach, the book offers valuable information on the role of salicylic acid in combating varied abiotic stresses.

Plants are challenged by biotic and abiotic stresses. They adjust to changing environmental conditions by adopting various measures to induce regulatory self-defense pathways in response to different stresses in order to maintain their genetic potential to optimally grow and reproduce. To minimize cellular damage caused by such stresses, phytohormones provide a number of signaling networks involving developmental processes and plant responses to environmental stress. Phytohormones are potential tools for sustainable agriculture in the future. Significant advances have been made in identifying and understanding plant-hormone signaling, especially salicylic acid.

Dr. Rahat Nazar obtained her Masters and Ph.D from Aligarh Muslim University, Aligarh. She has done Post Doc from Jamia Hamdard University, New Delhi, India. She has worked as JRF and SRF in the DST and UGC funded projects during research. She has published many research papers in leading journals of the world with high impact factor. She has also edited two books and one authored book. Dr. Rahat Nazar is a life of member of Indian Society for Plant Physiology (ISPP) and National Environmental Science Academy (NESA), New Delhi, India. She has been awarded with Junior Scientist Award (2010) by National Environmental Science Academy. Dr. Rahat research work is actively engaged in studying the role of phytohormones and mineral nutrition with special emphasis of photosynthetic efficiency and nutrient-use efficiency under optimal and abiotic stress conditions.

Dr. Noushina Iqbal has done her Ph.D from Aligarh and then Post Doc from Jamia Hamdard, New Delhi, India. She has many good publications in journals of national and international repute with high impact and has written 5 chapters and presented 4 papers in conferences. She has edited 2 books and authored 1 book. She is an eminent researcher and worked as a project fellow in UPCST funded research project and received UGC-BSR and CSIR-SRF fellowship during research. She is a member of Indian Society for Plant Physiology (ISPP). Dr. Iqbal works on the role of phytohormones, osmolytes and nutritional factors particularly nitrogen and sulfur in combating abiotic stress.

Nafees A. Khan, Professor of Plant Physiology is affiliated with Aligarh Muslim University (AMU), Aligarh (India). Prof. Khan obtained bachelor, masters and doctoral degrees at AMU, Aligarh, and also earned D.Sc. at the same university. In addition to innovative teaching, he is fond of researching and publishing and has to his credit more than 170 significant peer-reviewed scientific papers and a dozen of edited volumes on important aspects including plant stress physiology, abiotic stress tolerance, phytohormones, S and N nutrition, nutrient-use efficiency, and source-sink relations. A member of academic bodies of universities, Prof. Khan is also a life of member of major professional societies including Indian Society for Plant Physiology (ISPP) and National Environmental Science Academy (NESA), New Delhi, India, Indian Botanical Society. He also worked as subject expert for national and international bodies and was honored with the position of Editor-in-Chief of ‘Journal of Functional and Environmental Botany’ (2011-13). Since 2013, he is serving as an Executive Editor of ‘Journal of Functional and Environmental Botany’. In recognition of his contributions, Prof. Khan was elected as a Fellow of the ‘Indian Society for Plant Physiology’ and the ‘Indian Botanical Society’ and was also awarded with UGC-Research Award (2002), Distinguished Scientist Award (2015) by VIFRA International Foundation (India); Group Leader, DBT-BUILDER programme (2013-16), DBT, Govt. of India, New Delhi; Scientist of the Year Award (2005) and Eminent Scientist of the Year Award (2006) by NESA, New Delhi, India.