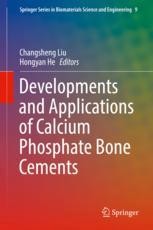 This book presents a state-of-the-art review of the latest advances in developing calcium- phosphate bone cements and their applications. It covers the synthesis methods, characterization approaches, material modification and novel binders, as well as the fabrication technologies of calcium-phosphate-based biomaterials in regenerative medicine and their clinical applications. It also highlights methodologies for fabricating scaffolds, biofunctional surfaces/interfaces and subsequently modulating the host response to implantable/injectable materials, and integrates a series of discussions and insights into calcium-phosphate cements and constructs in bone regenerative medicine. As such, the book not only covers the fundamentals but also opens new avenues for meeting future challenges in research and clinical applications.

Prof. Changsheng Liu is a Cheung Kong Scholar Professor at the School of Materials Science and Engineering of East China University of Science and Technology (ECUST). He is the director of the Ministry of Education’s Engineering Research Center for Biomedical Materials. Prof. Liu received his Ph.D. in Chemical Engineering from ECUST in 1996. He was a visiting professor at the University of Pennsylvania in 2005. His research interest focuses on the interactions between biomaterials and microenvironments and designing bioactive materials for in situ tissue regeneration. He has devoted to developing various biomaterials including CPC formulations with the superior properties and building the relationship between CPC-based biomaterials and clinic applications for over 20 years. Six CPC-based products and one bioengineered growth factor developed by Prof. Liu have been sold on the market and used in more than 500 hospitals in China. He has more than 200 refereed journal publications, 60 patents and invention disclosures, and 3 edited books to his name. His excellent innovations and significant contributions have earned him numerous honors and awards, including second prize at the National Award for Science and Technology Progress in 2003, the Ho Leung Ho Lee Foundation Scientific and Technological Innovation Award of 2007, International Fellow of Biomaterials Science and Engineering in 2012, and the second-prize of the National Award for Natural Sciences in 2014. He is also an editor for several journals, including Biomaterials Research, Biomatter, the Journal of Orthopaedic Translation, the Journal of Materiomics, and the Journal of Inorganic Materials.

Dr. Hongyan He is an associate professor at the Ministry of Education’s Engineering Research Center for Biomedical Materials at ECUST. She received her B.S. degree in Chemical Engineering at Tsinghua University in 1997, completed her Ph.D. degree in Chemical and Biomolecular Engineering at the Ohio State University (OSU), and received an OSU Presidential Fellowship in 2006. Her doctoral work focused on cutting-edge research in developing novel biomedical systems for drug delivery. Then, she served as a key research engineer at the Nanoscale Science and Engineering Center for Affordable Nanoengineering of Polymer Biomedical Devices at OSU. Before joining ECUST in 2013, she worked as a principle scientist at BioLOC LLC. in the USA, and directed the research and development of automatic ELISA microfluidic chips by combining advanced surface modification and micro/nano fabrication technologies. She has published over 30 refereed journal articles, 2 book chapters, and holds 3 patents. Currently, her research interests include nanoscale phenomena at the surface and interface of bone-repairing biomaterials and development of low-cost biochip/biosensors.