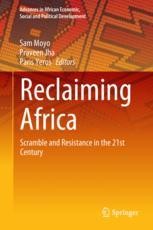 Scramble and Resistance in the 21st Century

This book presents the findings of research conducted by scholars and activists associated with the Agrarian South Network, based mainly in Africa, Asia and Latina America. The research articulates a Southern perspective on the “new scramble” for Africa, with a view to strengthen tri-continental solidarities. The book explains the significance of the new scramble in terms of the economic structures inherited from the late-nineteenth-century scramble and the subsequent post-independence period. The renewed competition for Africa’s land and natural resources and the resumption of economic growth at the turn of the millennium have revived concerns regarding the continent’s position in the world economy and the prospects for its development in the twenty-first century. In this regard, the book addresses two related issues: the character of the expansion of Southern competitors in relation to the more established Western strategies; and the impact of the renewed influx of investments in land, minerals, and associated infrastructure. The findings are presented with empirical rigor and conceptual clarity, to enable the reader to grasp what really is at stake in the twenty-first century – an epic struggle to reclaim Africa from the monopolies that exercise control over its land, minerals, labour, and destiny.

Sam Moyo (1954–2015) was Executive Director of the African Institute for Agrarian Studies (AIAS, 2002–15), Harare, Zimbabwe, President of the Council for the Development of Social Science Research in Africa (CODESRIA, 2009–11), and Founding Editor-in-Chief of Agrarian South: Journal of Political Economy (2012–15). An eminent scholar of land and agrarian studies, he published widely in academic journals and authored several books, including, among the most recent, The Agrarian Question in the Neoliberal Era (Pambazuka, 2011), Land and Agrarian Reform in Zimbabwe: Beyond White-Settler Capitalism (CODESRIA, 2013), and Land in the Struggles for Citizenship in Africa (CODESRIA, 2015).

Praveen K. Jha is Professor of Economics at the Centre for Economic Studies and Planning (CESP) and adjunct at the Centre for Informal Sector and Labour Studies (CISLS), School of Social Sciences, Jawaharlal Nehru University (JNU), New Delhi, India. He has been a visiting fellow at a number of universities and institutions in Germany, China, Switzerland, South Africa, and Zimbabwe, and has collaborated in research programmes with UN agencies, including the ILO, UNICEF, UNDP, and FAO. He has published widely on labour and agrarian relations, the economics of education, and public finance. He is a co-editor of Agrarian South: Journal of Political Economy.