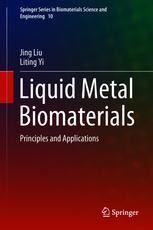 Jing Liu received his double bachelor’s degrees (B.E. in Power Engineering and Control and B.S. in Physics) in 1992, and his Ph.D. in Thermal Science with a focus on Bioengineering in 1996, all from Tsinghua University. He then served as assistant professor there, a postdoctoral research associate at Purdue University, and a senior visiting scholar at MIT. He has been a professor at the Chinese Academy of Sciences’ Technical Institute of Physics and Chemistry since July 1999 and a professor at Tsinghua University since August 2008. Dr. Liu works intensively in interdisciplinary areas combining biomedical engineering, mobile health care technologies, liquid metals and thermal science.

He has made significant contributions to the bioheat transfer area through numerous conceptual innovations, methodological developments and technical inventions, many of which have been adopted for clinical use. Further, Dr. Liu has pioneered a number of nonconventional technologies and fundamental scientific discoveries by introducing room-temperature liquid metals into diverse areas, which has successfully initiated many new directions in biomedical engineering, soft machines, chip cooling, advanced manufacturing, etc. In this regard, his work in adopting liquid metals to electrically connect severed nerves was especially attributed as one of the “most amazing medical breakthroughs”. Dr. Liu is a winner of the William Begell Medal, one of the world’s most prestigious awards in thermal science; he is also a recipient of the 2010-2011 Best Paper of the Year Award from ASME Journal of Electronic Packaging, the 2003 National Science Fund for Distinguished Young Scholars of China, the National Science and Technology Award for Chinese Young Scientist etc.