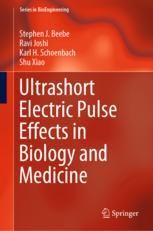 This book presents an overview of the current state of research on ultrashort electric field pulses of high intensity and their use in biology and medicine. It examines in detail the most recent and exciting advances in how nanosecond and picosecond electric pulse research has grown and expanded into new areas of biology and medicine.

Further, the book specifically focuses on electric pulses in the time domain, on intracellular effects as opposed to plasma membrane electroporation, and highlights the biological and medical applications of these unique pulse effects. Since the authors were initial innovators exploring nanosecond and picosecond pulses, their unique perspectives foreshadowed directions the research took, expanding into new areas that they continue to investigate today.

Stephen J. Beebe studied Zoology at Ohio University, Athens. He then served as a Peace Corps Volunteer in the British West Indies (1973–1975) teaching biology, working on soil and water conservation with 4H and diagnostic biochemistry and analysing the nutritional status of preschool children at Queen Elizabeth Hospital. As a PhD student, he purified and characterized cAMP-independent protein kinases involved in glycogen metabolism. As a Post-Doctoral Fellow and Research Associate at the Howard Hughes Medical Institute (HHMI) in Vanderbilt, he defined the roles for cAMP-dependent protein kinases (PKAs) and cAMP phosphodiesterases in regulating glycogen and lipid metabolism, insulin action, gene transcription and granulosa cell differentiation.

As a Fulbright and Marshal Scholar in Oslo, he cloned three catalytic subunits of PKA from a human testes library. He subsequently returned to the USA, serving as an Assistant Professor at the Jones Institute for Reproductive Medicine, where he showed that apoptosis markers in sperm could be used as markers for sperm quality. He also established procedures leading to successful pre-embryo genetic diagnosis and prevention of Tay–Sachs disease. Remaining at the Eastern Virginia Schools of Medicine (EVMS), but moving to the Departments of Pediatrics and Physiological Sciences, he defined structure–function relationships of PKA catalytic subunits and established roles for PKA to delay apoptosis in human neutrophils.

While at EVMS and since moving to Old Dominion University (ODU), over the last two decades he has demonstrated the effects and mechanisms of action of nanosecond pulsed electric fields (nsPEFs) on biological cell structures and function as a means of modulating signal transduction and ablating cancer. He is now investigating nsPEF ablation-induced immune responses in rat liver and mouse mammary cancer. As one of the leading pioneers developing uses for nsPEFs on biological cells and tissues, he has published over 70 papers on topics related to ultrashort electric pulse effects in biology and medicine and published a total of 121 peer-reviewed manuscripts including 9 book chapters since 1980. He serves on the Editorial Board of Hepatoma Research, Journal of Nanomedicine Research, Journal of Nanomedicine & Biotherapeutic Discovery and International Journal of Nano Studies & Technology, and holds 10 bioelectric patents.

Ravi P. Joshi received the B. Tech. and M. Tech. Degrees in Electrical Engineering from the Indian Institute of Technology in 1983, and 1985, respectively, and earned the Ph.D. degree in electrical engineering from Arizona State University. In 1989, he joined Old Dominion University. He is currently a full Professor at Texas Tech University since 2015. He has been involved in research broadly encompassing modeling and simulations of charge transport, bio-electrics and bio-physics, non-equilibrium phenomena, pulsed-power and electrophysics.  He was named a University Professor at Old Dominion University in 2007 and an Eminent Scholar in 2010.  He has used Monte Carlo methods for simulations of charge transport in solids, liquids and gases, and more recently atomistic Molecular Dynamics techniques for cell membranes and interaction phenomena at solid surfaces.  He is the author of over 350 articles, including 165 refereed journal publications. He has been a visiting scientist at Oak Ridge National Laboratory, Philips Laboratory, Motorola and NASA Goddard. He has also served as a Guest Editor for five Special Issues of the IEEE Transactions on Plasma Science in 2003, 2007, 2009, 2011, 2014.  He has also been an IEEE Distinguished Lecturer (since 2014), a Fellow of the Institute of Electrical and Electronics Engineers (IEEE since 2008), a Fellow of the Institute of Physics (IOP since 2014), and a Fellow of the Institution of Engineering and Technology (IET since 2014), and Institution of Electronics and Telecommunication Engineers (IETE since 2014).  In 2010 he was elected a Fellow of IEEE for “contributions to bio-electrics and simulation of cellular responses to pulsed power excitation”.  To date, he has a total of 6079 citations according to Google Scholar, with an h-index of 42 and i10–index of 114.  He has also served as reviewer for the  Air Force Office of Scientific Research, National Science Foundation, NSF I/UCRC, Israel Science Foundation, Agence Nationale Recherche (ANR  --  France's National Research Agency) and the Czech Science Foundation (GACR), and over 20 international academic peer-reviewed journals.  He was part of the organizing committee of the 2010 IEEE International Conference on Plasma Science, and Chair of the Publications and Publicity Committee for IEEE Conference on Electrical Insulation and Dielectric Phenomena (2007, 2008). He holds 1 patent.

Karlk H. Schoenbachreceived the Diploma degree in physics and the Dr. rer. nat. degree in physics in 1966 and 1970, respectively, from the Technische Hochschule Darmstadt (THD), Germany. From 1970 to 1978, he was working at the THD in the areas of high pressure gas discharge physics and on the dense plasma focus. From 1979 to 1985, he held a faculty position at Texas Tech University, where he was involved in research on fast opening switches, especially electron-beam and laser controlled diffuse discharge opening switches. In 1985, he joined Old Dominion University in Norfolk, VA. He served as Director of the Physical Electronics Research Institute from 1987 to 2002, and the founding director of the Frank Reidy Research Center for Bioelectrics from 2002 to 2008, which with now more than sixty researchers and staff focuses on pulsed electric field effects on cells and tissue. He was named Eminent Scholar at Old Dominion University in 1989 and held the Batten Endowed Chair in Bioelectric Engineering from 2005 until his retirement in 2010. He was active in research on photoconductive and electron-beam controlled switches until 1993, and has then concentrated his research efforts on high-pressure glow discharges, particularly microdischarges, and on environmental and medical applications of pulse power technology. He continues to be actively involved in bioelectrics research, particularly in research on bioelectric effects of intense nanosecond and picosecond pulses. He has chaired a number of workshops and conferences, among them the 1991 IEEE International Conference on Plasma Science, and the first ElectroMed conference in 1999. He was elected Fellow of IEEE in 1994 for “contributions to the research and development of very-high-power electronic devices”, and received the 2000 High Voltage Award, the Peter Haas Pulsed Power Award in 2007, and the Frank Reidy Bioelectrics Award in 2010. He has published over 450 papers in refereed journals and in conference proceedings and holds 25 patents, most of them related to bioelectrics. His scientific work is cited more than 16,000 times with an h-value of 66.  He has been an associate editor of the IEEE Transactions on Plasma Science from 1989 to 2007, guest editor of the IEEE Transactions on Electron-Devices (1990), the IEEE Transactions on Plasma Science (1999), and the IEEE Transactions on Dielectrics and Electrical Insulation (2003 and 2009). He is co-editor of books on “Low Temperature Plasma Physics” (2001 and 2007 (2nd edition)), and on “Atmospheric Pressure Air Plasmas” (2004).

Shu Xiao received the Ph.D. degree in electrical engineering from Old Dominion University, Norfolk, VA, in 2004. He was in the Ph.D./Master joint program in the University of Electronic Sciences and Technology of China, Sichuan, from 1996 to 2001. He is currently Associate Professor in the Department of Electrical and Computer Engineering, Old Dominion University, where he teaches power electronics and electric drives. He is also working at the Frank Reidy Research Center for Bioelectrics. His research interests include pulsed power, high power electromagnetics, electrical discharges in liquids and gases. His research interests also include using pulsed power and pulsed electromagnetic radiation in both therapeutics and imaging applications. He has published more than 30 journal papers and book chapters on these topics. He was a Guest Editor for a Special Issue of the IEEE Transactions on Plasma Science. He has received research fundings from Air Force Office of Scientific Research (AFOSR), Office of Naval Research (ONR) and other DoD agencies. He also has teamed with biologists as Principal Investigator, Co-investigator and received multiple fundings from National Institute of Health (NIH). He holds four patents.