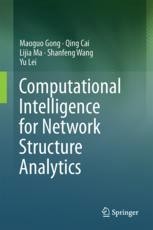 This book presents the latest research advances in complex network structure analytics based on computational intelligence (CI) approaches, particularly evolutionary optimization. Most if not all network issues are actually optimization problems, which are mostly NP-hard and challenge conventional optimization techniques. To effectively and efficiently solve these hard optimization problems, CI based network structure analytics offer significant advantages over conventional network analytics techniques.  Meanwhile, using CI techniques may facilitate smart decision making by providing multiple options to choose from, while conventional methods can only offer a decision maker a single suggestion. In addition, CI based network structure analytics can greatly facilitate network modeling and analysis. And employing CI techniques to resolve network issues is likely to inspire other fields of study such as recommender systems, system biology, etc., which will in turn expand CI’s scope and applications.
As a comprehensive text, the book covers a range of key topics, including network community discovery, evolutionary optimization, network structure balance analytics, network robustness analytics, community-based personalized recommendation, influence maximization, and biological network alignment.
Offering a rich blend of theory and practice, the book is suitable for students, researchers and practitioners interested in network analytics and computational intelligence, both as a textbook and as a reference work.

Dr. Maoguo Gong received his B. Eng degree and Ph.D. degrees from Xidian University. Since 2006, he has been teaching at Xidian University. He was promoted to associate professor and full professor in 2008 and 2010, respectively. Dr. Gong’s research interests are broadly in the area of computational intelligence, with applications to optimization, learning, data mining and image understanding. He has published over one hundred papers in journals and conferences, and holds fifteen patents as the first inventor. He is currently leading or has completed over ten projects as Principal Investigator, funded by the National Natural Science Foundation of China, the National High Technology Research and Development Program (863 Program) of China and others. He has been distinguished with the prestigious National Program Award for Support of Top-notch Young Professionals (selected by the Central Organization Department of China), the Excellent Young Scientist Foundation Award (selected by the National Natural Science Foundation of China), the New Century Excellent Talent in University Award (selected by the Ministry of Education of China), the Fok Ying Tung Education Foundation Young Teacher Award, the Shaanxi Province Young Scientist Award, the Shaanxi Province New Scientific and Technological Star Award, the Elsevier SCOPUS Young Researcher Award of China, and the National Natural Science Award of China. He is the Executive Committee Member of Chinese Association for Artificial Intelligence, Senior Member of IEEE and Chinese Computer Federation, Associate Editor or Editorial Board Member for five journals including IEEE Transactions on Evolutionary Computation and Memetic Computing.

Dr. Qing Cai received his B. Eng. degree in electronic information engineering from Wuhan Textile University, Wuhan, China, in 2010. Since then he was pursuing the Ph.D. degree in Pattern Recognition and Intelligent Systems at the School of Electronic Engineering, Xidian University, Xi’an, China and received his Ph.D. degree in 2015. Now he is working as a Postdoctoral Research Fellow in Hong Kong Baptist University, Hong Kong. Dr. Cai’s research interests are in the area of computational intelligence, complex network analytics, recommender systems and population ecology.

Dr. Lijia Ma received his B.S. degree in communication engineering from Hunan Normal University, Changsha, China, in 2010. After that, he began to work towards his doctor degree as a 5-Year Master-Ph.D Graduate Program student in Xidian University, and received his Ph.D. degree in 2015. Now, he is working as a Post-doctoral Research Fellow in Hong Kong Baptist University, Hong Kong. His research interests include computational intelligence, network pattern mining and behavior optimization, biological network analysis and cloud computing. Until now, he has published 20 journal and conference papers. He was awarded ``Outstanding Graduate of Hunan Normal University''. Moreover, he was received ``the National Scholarship for Distinguished Doctorates'' in both 2013 and 2014. In addition, he was funded by ``Nature Inspired Computation and its Application (NiCai) project'' of the European Group from December 2014 to April 2015.

Shanfeng Wang received the B.Eng. degree in Electronic and Information Engineering from Xidian University, Xi’an, China, in 2012. Now he is working towards the Ph.D. degree in Pattern Recognition and Intelligent Systems at the School of Electronic Engineering, Xidian University, Xi’an, China. His current research interests are in the area of evolutionary algorithm, complex network structure analytics and recommender systems.

Dr. Yu Lei received the B.S. degree in electronic and information engineering and the Ph.D. degree in pattern recognition and intelligent systems from Xidian University, Xi'an, China, in 2009 and 2015, respectively. He is currently a Lecturer in Northwestern Polytechnical University. His current research interests include computational intelligence, complex network analytic and multi-objective optimization.