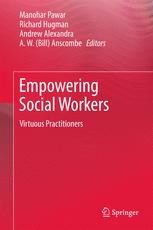 This book demonstrates the central role of ethical character in effective social work practice. Showcasing select biographies of social workers, it reveals how skilled practitioners have developed such core virtues as compassion, love, commitment, prudence, respect for human dignity and a critical sense of social justice through the course of their working lives, and how they apply these virtues in a wide variety of settings and situations to enhance the well-being of the people and communities they work with. As such, the book offers a powerful and inspiring resource to help educators, students and practitioners understand the unbreakable link between what social workers and other social welfare and social development professionals do and who they are, and thereby cultivate core qualities that should be promoted.

“Pawar, Hugman, Alexandra and Anscombe have found a novel and creative way to explore virtues in social work by examining the career contributions of a group of social work practitioners engaged in ‘virtuous action’. Their stories are inspiring and they provide much-needed role models for students and practitioners embarking on empowering practice” – Dr. Mel Gray, Professor of Social Work, The University of Newcastle. New South Wales, Australia.

"In an age where the virtues of truth, cooperation and “doing the right thing” are increasingly being eroded in public life, this book serves as both an inspiration and invaluable resource to all social work practitioners seeking to reflect on, and improve their practice" - Dr. Martin Ryan, Social Worker, Counsellor/Community Educator, Jesuit Social Services, Melbourne.

“The editors are to be commended for examining the virtuous characters of these ten professional social workers. The use of detailed biographies is an innovative and important approach which helps us to appreciate just what a tremendous impact the virtues can have." - Dr. Christian B. Miller, A. C. Reid Professor of Philosophy, Director, The Character Project, Wake Forest University, USA.

Manohar Pawar is Professor of Social Work at the School of Humanities and Social Sciences and a member of the Institute for Land and Water and Society, Charles Sturt University, Wagga Wagga, Australia. Manohar has over 30 years of social work education, research and practice experience in Australia and India and has published over 100 refereed journal articles, books and book chapters. His current areas of interest include virtue-led social work practice, international social development, social work and social policy, social aspects of climate change and water, social work education, informal care and ageing, NGOs and community development. Manohar is a recipient of a Faculty of Arts award for Academic Excellence (2009), the Australian Learning and Teaching Council citation award for Outstanding Contributions to Student Learning (2008) and an Association of Commonwealth Universities Quality of Life Award (2001). He is the president of the Asia-Pacific Branch of the International Consortium for Social Development (ICSD) and his recent books include Future Directions in Social Development (2017), Reflective Social Work Practice: Thinking, Doing and Being (2015) and Social and Community Development Practice (2014).

Richard Hugman is Professor of Social Work at the School of Social Sciences, the University of New Social Wales, Australia. His research interests include ethics for the caring professions, virtue ethics in social work, human rights and refugees settled in Australia, late life care, community and social welfare, mental health and the organization of social services. Richard is a qualified social worker who has spent a decade in practice. Since 2004 Richard has worked with UNICEF Vietnam to advise the Vietnam Government on the development of professional social work. Between 2002 and 2008 Richard was a member of the Ethics Committee of the International Federation of Social Workers and from 2008 to 2014 he was the Federation’s ethics commissioner. Richard is a Foundation Fellow of the Australian College of Social Work and a Fellow of the Australian Association of Gerontology.

Andrew Alexandra is Senior Research Fellow at the University of Melbourne’s Centre for Applied Philosophy and Public Ethics and his main research and teaching interests lie in political philosophy and professional and applied ethics. Among his many publications in these areas are his co-authored books Media, Markets and Morals (2011), Integrity Systems for Occupational Groups (2010) and Ethics in Practice: Moral Theory and the Professions (2009). Andrew has been involved with collaborative research and consultancies for such organizations as the Victoria Police, Professional Standards Council, Australian Association of Social Workers, Australian Anthropological Society, International Baccalaureate Organization (UK) and the Safety Institute of Australia.

A.W. (Bill) Anscombe is Adjunct Associate Professor of Social Work at the School of Humanities and Social Sciences, Charles Sturt University, Wagga Wagga, Australia. He has nearly forty years of experience in social work practice, education and research, including practice in correctional settings, joint academic and industry appointments, and a year secondment as Director of Child and Family Services in New South Wales (NSW). Spanning 24 research projects and consultancies, two books and numerous chapters and articles, Bill’s research covers corrections, Indigenous Australians, child welfare and protection, chaplaincies and churches, supported playgroups and community development. He is the recipient of two Faculty of Arts Leadership Awards (2010 and 2011) and a National Volunteers Award (2008), was a member of the NSW Juvenile Justice Department Collaborative Research Group and the NSW Department of Community Services Research Committee, and is a current member of the expert panel for the Closing the Gap Clearinghouse and the Australian Association of Social Workers Accreditation Panel.