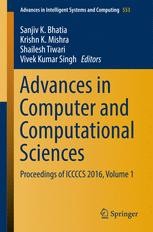 Advances in Computer and Computational Sciences

Exchange of information and innovative ideas are necessary to accelerate the development of technology. With advent of technology, intelligent and soft computing techniques came into existence with a wide scope of implementation in engineering sciences. Keeping this ideology in preference, this book includes the insights that reflect the ‘Advances in Computer and Computational Sciences’ from upcoming researchers and leading academicians across the globe. It contains high-quality peer-reviewed papers of ‘International Conference on Computer, Communication and Computational Sciences (ICCCCS 2016), held during 12-13 August, 2016 in Ajmer, India. These papers are arranged in the form of chapters. The content of the book is divided into two volumes that cover variety of topics such as intelligent hardware and software design, advanced communications, power and energy optimization, intelligent techniques used in internet of things, intelligent image processing, advanced software engineering, evolutionary and soft computing, security and many more. This book helps the perspective readers’ from computer industry and academia to derive the advances of next generation computer and communication technology and shape them into real life applications.

Dr. Sanjiv K. Bhatia received his Ph.D. in Computer Science from the University of Nebraska, Lincoln in 1991.  He presently works as Professor and Graduate Director (Computer Science) in the University of Missouri, St. Louis.  His primary areas of research include image databases, digital image processing, and computer vision.  He has published over 40 articles in those areas. He has also consulted extensively with industry for commercial and military applications of computer vision. He is an expert in system programming and has worked on real-time and embedded applications. He serves on the organizing committee of a number of conferences and on the editorial board of international journals. He has taught a broad range of courses in computer science and was the recipient of Chancellor’s Award for Excellence in Teaching in 2015.  He is a senior member of ACM.

Dr. Krishn K. Mishra is currently works as a Visiting Faculty, Department of Mathematics & Computer Science, University of Missouri, St. Louis, USA. He is an alumnus of Motilal Nehru National Institute of Technology Allahabad, India which is also his base working institute. His primary area of research includes evolutionary algorithms, optimization techniques, and design and analysis of algorithms. He has published more than 50 publications in International Journals and in Proceedings of International Conferences of repute. He has served as a program committee member of several conferences and also edited Scopus and SCI-indexed journals. He has 15 years of teaching and research experience during which he made all his efforts to bridge the gaps between teaching and research.

Dr. Shailesh Tiwari is currently works as a Professor in Computer Science and Engineering Department, ABES Engineering College, Ghaziabad, India. He is also administratively heading the department. He is an alumnus of Motilal Nehru National Institute of Technology Allahabad, India. He has more than 15 years of experience in teaching, research and academic administration. His primary areas of research are software testing, implementation of optimization algorithms and machine learning techniques in software engineering. He has also published more than 40 publications in International Journals and in Proceedings of International Conferences of repute. He has served as a program committee member of several conferences and edited Scopus and E-SCI-indexed journals. He has also organized several international conferences under the banner of IEEE and Springer. He is a Senior Member of IEEE, member of IEEE Computer Society and Executive Committee member of IEEE Uttar Pradesh section. He is a member of reviewer and editorial board of several International Journals and Conferences.

Dr. Vivek Kumar Singh is Assistant Professor at Department of Computer Science, Banaras Hindu University, India. His major research interest lies in the area of text analytics. Currently, he is working on scientometrics, sentiment analysis, social network analysis; altmetrics which are the broader research area of text analytics. He has developed and coordinated a text analytics laboratory, which works in various text analytics tasks. He is an alumnus of Allahabad University, Allahabad, India. He has published more than 30 publications in International Journals and in Proceedings of International Conferences of repute. He has also served in South Asian University, Delhi, India as an Assistant Professor for more than 4 years. He has also associated with several research projects such as Indo-Mexican Joint Research Project funded jointly by the Department of Science and Technology, Government of India along with the National Council for Science and Technology (CONACYT) of the United Mexican States.
Show all