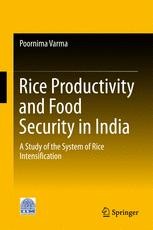 A Study of the System of Rice Intensification

This book contributes to the adoption of agricultural technology in general and to literature on the System of Rice Intensification (SRI) in particular by identifying the factors that influence the decision to adopt SRI and examining SRI’s impact on household income and yield. The study also discusses the importance of SRI in achieving higher rice productivity and food security. Conducted on behalf of the Government of India’s Ministry of Agriculture from October 2014 to March 2016, the study collected detailed and extensive household-level data.

As the second largest producer and consumer, India plays an important role in the global rice economy. Food security in India has been traditionally defined as having a sufficient supply of rice at an affordable price. However, in recent years rice cultivation in India has suffered from several interrelated problems. Increased yields achieved during the green revolution period and with the help of input-intensive methods involving high water and fertiliser use are now showing signs of stagnation and concomitant environmental problems due to salinisation and waterlogging of fields. Water resources are also limited; as such, water for irrigation must contend with increasing industrial and urban needs.
As a result of all these factors, rice farmers have experienced a downturn in productivity growth. Since increasing the area of rice cultivation is not feasible, the additional production has to be achieved using less land, less water and fewer additional inputs. The new intensification methods for rice cultivation known as the System of Rice Intensification (SRI), which originated in Madagascar, offer a promising systemic approach to enhancing rice production at affordable costs by simultaneously reducing input requirements and causing less harm to the environment. The SRI approach is expected to enhance yield and substantially reduce water and other input requirements by altering plant, soil, water and nutrient management practices. With SRI taking firm root in India, the book examines and analyses the adoption and the economic impact of SRI in three major rice producing States of India: Karnataka, Madhya Pradesh and Orissa.
Show all
About the authors

Poornima Varma is an Assistant Professor at the Centre for Management in Agriculture (CMA) of the Indian Institute of Management Ahmedabad (IIMA). She holds a PhD in economics from the Centre for Economic Studies and Planning at Jawaharlal Nehru University, New Delhi. She was a recipient of a US Fulbright scholarship in 2006 and was subsequently a visiting research scholar at the Department of Economics of the University of Massachusetts, Amherst, USA from 2007 to 2008. Prior to joining the IIMA she worked as an Assistant Professor at the Department of Policy Studies of TERI University, New Delhi. She has also worked with the Centre for WTO Studies (CWS) of the Indian Institute of Foreign Trade (IIFT) and the Indian Council for Research on International Economic Relations (ICRIER). Her work chiefly focuses on international trade, agriculture, environment and the adoption of agricultural technologies. She has extensively published in top peer-reviewed journals for agricultural and applied economics.