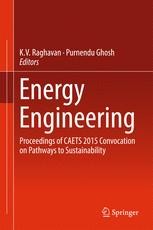 Proceedings of CAETS 2015 Convocation on Pathways to Sustainability

This book contains the proceedings of CAETS 2015 Convocation on ‘Pathways to Sustainability: Energy, Mobility and Healthcare Engineering’ that was held on October 13-14, 2015 in New Delhi. This 3 volume proceedings provide an international forum for discussion and communication of engineering and technological issues of common concern. This volume talks about ‘Energy’ and includes 22 chapters on diverse topics like renewable energy, advances and applications of bio-energy and bio-refinery, energy options and scenarios, wind energy for buildings and transportation, etc. The contents of this volume will be useful to researchers, professionals, and policy makers alike.

He has held various levels of scientific positions in three national laboratories of the Council of Scientific and Industrial Research (CSIR) of India. He was appointed as the Director of Central Leather Research Institute, Chennai in 1994, and in 1996 he took over the Directorship of the Indian Institute of Chemical Technology, Hyderabad. On successful completion of this tenure, he was appointed as the Chairman of Recruitment and Assessment Centre of DRDO, Ministry of Defence, Government of India in May 2004. In addition, Dr. Raghavan chairs scientific committees of public and private sector bodies on clean technologies, catalytic ethanol reforming, biorefining and allied areas. The recipient of six national awards, Dr. Raghavan has published more than 150 papers, filed 45 patents and edited five books. Chemical process development and design, reaction engineering, simulation and modeling, and chemical hazard analysis are his areas of specialization. His basic research contributions cover the simulation of complex reactions in fixed bed reactors, hydrodynamics of multiphase reaction systems, envirocatalysis for clean processing, zeolite catalysis for macromolecules, thermochemistry, and kinetics of charge transfer polymerization and modeling of chemical accidents. His current research activities are in process intensification of water gas shift reaction, catalytic CO2 decomposition, analysis of CO2 capture technologies and characterization of the reactivity of ionic liquids.

Purnendu Ghosh is the Executive Director, Birla Institute of Scientific Research, Jaipur. Prior to this he was Professor at Indian Institute of Technology, Delhi. He worked at the Swiss Federal Institute of Technology (ETH), Zurich, Switzerland; University of Melbourne, Australia; National Research Centre for Biotechnology (GBF), Braunschweig, Germany. He has taken a lead role in augmenting bioprocess engineering and biotechnology activities in the country as a member of several Task Forces of the Department of Biotechnology, Government of India. He is currently the Chief Editor of Publications of Indian National Academy of Engineering. He is a columnist of a leading newspaper group. Besides technical publications, he has written books of different genre.