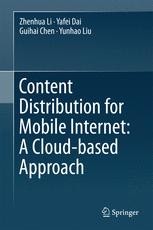 This book investigates the cloud-based techniques of content distribution mainly for mobile Internet. It starts with hot topics such as cellular traffic optimization and video content delivery. By integrating the cloud scheme, it further tackles issues of traffic-saving, energy-efficient, high-speed, and delay-tolerant content delivery with regard to mobile Internet. It covers both theoretical algorithms and their real-world system implementations. In particular, various well-known cloud platforms such as Baidu Traffic Guard, Tencent QQXuanfeng, Google Drive, Microsoft OneDrive, and Dropbox are elaborated respectively in the book. Lastly, it includes an educational and experimental cloud computing platform allowing public access, which benefits researchers, practitioners, and developers in the field of cloud computing/storage and mobile Internet. Throughout the book there are helpful and practical tips on setting up cloud systems that readers can easily follow.

Zhenhua Li has been an assistant professor at present and a post-doc researcher in School of Software at Tsinghua University since 2013. He obtained the Ph.D. degree in Computer Science from Peking University in 2013. He visited the University of Minnesota, Tencent Research, and Hong Kong Polytechnic University in 2011, 2010, and 2007, respectively. His research interests are mainly on cloud computing/storage, mobile Internet, cloud downloading, and peer-to-peer (P2P) content distribution. He has published over 40 papers on recognized conferences and core journals, as well as a book entitled ‘Peer-to-Peer Network: Structure, Application and Design’ in Chinese with Tsinghua University Press. He served actively as program committee members of various international conferences.

Yafei Dai has been a Professor in School of Electronics Engineering and Computer Science (EECS) at Peking University since 2000. Before joining Peking University, she had held positions of professor, associated professor, and assistant professor in Department of Computer Science and Technology at Harbin Institution of Technology (HIT) in China since 1987. She obtained the Ph.D. degree, M.S. degree, and B. E. degree in HIT in 1993, 1986, and 1982, respectively. Her research interests mainly fall in distributed systems, storage systems, and social networks. She has published around 100 academic papers in competitive conferences and journals.

Guihai Chen is a distinguished professor at Shanghai Jiao Tong University. He earned the Ph.D. degree in Computer Science from the University of Hong Kong in 1997. He had been invited as a visiting professor by Kyushu Institute of Technology in Japan, the University of Queensland in Australia, and Wayne State University in USA. He has a wide range of research interests on parallel computing, wireless networks, data centers, peer-to-peer computing, high-performance computer architecture, data engineering, and so forth. He has published more than 200 papers in competitive conferences and journals. He has won many honors and awards, in particular the First Prize of Natural Sciences by the Ministry of Education of China in 2015.

Yunhao Liu is a Chang Jiang Professor and dean of School of Software at Tsinghua University, China. He received the Ph.D. degree and M.S. degree in Computer Science and Engineering from Michigan State University in 2003 and 2004, respectively, and a B.S. degree in the Automation Department of Tsinghua University in 1995. His research interests include distributed systems, wireless sensor networks/RFID, cyber physical systems, and Internet of Things (IoT), privacy and security, network management and diagnosis, etc. He has published over 300 papers on prestigious conferences and journals, as well as 2 books entitled ‘Introduction to IoT’ and ‘Location, Localization, and Localizability’. He is serving as the Associate Editor for IEEE/ACM Transactions on Networking and ACM Transactions on Sensor Networks. He is a Fellow of ACM and IEEE.