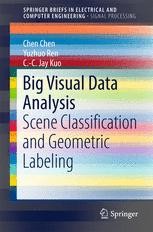 Yu-Zhuo Ren received her B.S. degree in Hebei University of Technology (HUT), China, in 2011 and the M.S. degree in Electrical Engineering from University of Southern California (USC) in 2013. She is now working as a research assistant in the Media Communication Lab led by Professor Kuo. Her research interests include image understanding related problems, in the field of computer vision and machine learning.

C.-C. Jay Kuo Dr. C.-C. Jay Kuo received the B.S. degree from the National Taiwan University, Taipei, in 1980 and the M.S. and Ph.D. degrees from the Massachusetts Institute of Technology, Cambridge, in 1985 and 1987, respectively, all in Electrical Engineering. From October 1987 to December 1988, he was Computational and Applied Mathematics Research Assistant Professor in the Department of Mathematics at the University of California, Los Angeles. Since January 1989, he has been with the University of Southern California (USC).
He is presently Director of the Multimedia Communication Lab. and Professor of Electrical Engineering and Computer Science at the USC. His research interests are in the areas of multimedia data compression, communication and networking, multimedia content analysis and modeling, and information forensics and security. Dr. Kuo has guided 119 students to their Ph.D. degrees and supervised 23 postdoctoral research fellows. Currently, his research group at the USC has around 30 Ph.D. students, which is one of the largest academic research groups in multimedia technologies. He is coauthor of about 220 journal papers, 850 conference papers and 12 books. He delivered over 550 invited lectures in conferences, research institutes, universities and companies.