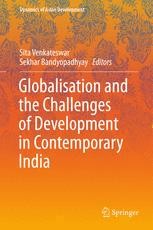 Globalisation and the Challenges of Development in Contemporary India

This volume brings together multidisciplinary, situated and nuanced analyses of contingent issues framing a rapidly changing India in the 21st century. It moves beyond the ready dichotomies that are often extended to understand India as a series of contrasts and offers new insights into the complex realities of India today, thereby enabling us to anticipate the decades to come.

The editors focus on three major themes, each discussed in a section: The first section, Framing the Macro-Economic Environment, defines the framework for interrogating globalisation and socio-economic changes in India over the last few decades of the 20th century spiraling into India in the 21st century. The next section, Food Security and Natural Resources, highlights critical considerations involved in feeding a burgeoning population. The discussions pose important questions in relation to the resilience of both people and planet confronting increasingly unpredictable climate-induced scenarios. The final section, Development, Activism and Changing Technologies, discusses some of the social challenges of contemporary India through the lens of inequalities and emergent activisms. The section concludes with an elaboration of the potential and promise of changing technologies and new social media to build an informed and active citizenry across existing social divides.

Sita Venkateswar is a socio-cultural anthropologist in the School of People, Environment and Planning, Massey University and Associate Director, Massey chapter, New Zealand India Research Institute, New Zealand. Her research documents the ways academic practices can be responsive to social inequities and she incorporates critical feminist scholar-activist research methodologies, designated as Public Anthropology, informed by feminist and postcolonial theories. She uses a comparative and reflexive anthropological lens to address issues of internal colonialism, gender, poverty, social oppression and structural violence within the postcolonial and neoliberal contexts of South Asia. Her ethnography Development and Ethnocide: Colonial Practices in the Andaman Islands (2004) is based on her PhD fieldwork in the Andaman Islands from 1989 to 1992 funded by the National Science Foundation Dissertation Improvement Grant. Her co-edited book, The Politics of Indigeneity: Dialogues and Reflections on Indigenous Activism (2011) published by Zed Books. Her current research explores multi-species approaches to food resilience that focuses on millet cultivation in India.

Sekhar Bandyopadhyay is Director, New Zealand India Research Institute, School of History, Philosophy, Political Science & International Relation, New Zealand. Sekhar Bandyopadhyay is Director of the New Zealand India Research Institute and Professor of Asian History at Victoria University of Wellington. His academic specialisation is in social and political history of colonial and postcolonial India. He has also written on the Indian diaspora and India-New Zealand relations in historical times. He has published seven books, eight edited or co-edited books, and more than fifty book chapters and journal articles. In 2009 he was elected a Fellow of the Royal Society of New Zealand. In 2014, for his book Decolonization in South Asia: Meanings of Freedom in Post-independence West Bengal, 1947-52, he was awarded the Rabindra Smriti Puraskar by the Bangla Academy, Government of West Bengal.