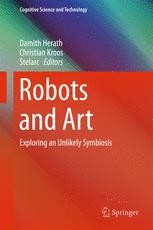 The first compendium on robotic art of its kind, this book explores the integration of robots into human society and our attitudes, fears and hopes in a world shared with autonomous machines. It raises questions about the benefits, risks and ethics of the transformative changes to society that are the consequence of robots taking on new roles alongside humans. It takes the reader on a journey into the world of the strange, the beautiful, the uncanny and the daring – and into the minds and works of some of the world’s most prolific creators of robotic art.

Offering an in-depth look at robotic art from the viewpoints of artists, engineers and scientists, it presents outstanding works of contemporary robotic art and brings together for the first time some of the most influential artists in this area in the last three decades. Starting from a historical review, this transdisciplinary work explores the nexus between robotic research and the arts and examines the diversity of robotic art, the encounter with robotic otherness, machine embodiment and human–robot interaction. Stories of difficulties, pitfalls and successes are recalled, characterising the multifaceted collaborations across the diverse disciplines required to create robotic art.

Although the book is primarily targeted towards researchers, artists and students in robotics, computer science and the arts, its accessible style appeals to anyone intrigued by robots and the arts.

Dr. Damith Herath received his PhD in Robotics from the University of Technology, Sydney in 2008 while at the ARC Centre of Excellence for Autonomous Systems (CAS) and has a BSc (Hons) in Production Engineering, University of Peradeniya, Sri Lanka in 2001. He held a doctoral fellowship at CAS prior to joining MARCS Institute on the Thinking Head Project as the Research Engineer. At MARCS he led several robotic projects that explore various nuances of Human-Robot Interaction including reciprocal influences between the arts and robotics. His interests include autonomous robot navigation, localization and mapping, human-robot interaction and robotic art. Over the last four years he has contributed to a number of robotic art projects as the lead roboticist. He is also the convener and program co-chair of the 2011 International Conference on Robotics and Automation - Workshop on Robots and Art.

Dr. Christian Kroos received his M.A. and Ph.D. in Phonetics and Theatre Studies from the Ludwigs-Maximilians-Universität, München, Germany. His work on speech articulator movements and face motion during spoken language led to interdisciplinary research covering computer vision, cognitive sciences and robotics conducted internationally at the Institute of Phonetics and Speech Processing at Ludwigs-Maximilians-Universität (Germany), at ATR International (Japan) and at Haskins Laboratories (USA). At MARCS Institute, University of Western Sydney, Australia, he explored non-verbal human-machine interaction in the Thinking Head project. Besides his interest in robotic agents, he is still fascinated by human speech production and the evolution of language.

Stelarc explores alternate anatomical architectures. He is an artist whose projects incorporate prosthetics, robotics, biotechnology, medical imaging and the internet. He has performed with a Third Hand, a Stomach Sculpture, Exoskeleton and a Prosthetic Head. Fractal Flesh, Ping Body and Parasite are internet performances that explore remote and involuntary choreography. He is surgically constructing and stem-cell growing an ear on his arm that will be internet enabled. In 1996 he was made an Honorary Professor of Art and Robotics at Carnegie Mellon University, Pittsburgh and in 2002 was awarded an Honorary Doctorate of Laws by Monash University, Melbourne. In 2010 was awarded the Ars Electronica Hybrid Arts Prize. In 2014 he initiated the Alternate Anatomies Lab. In 2015 he received the Australia Council’s Emerging and Experimental Arts Award. Stelarc is currently a Distinguished Research Fellow, School of Design and Art (SODA) at Curtin University. His artwork is represented by the Scott Livesey Galleries, Melbourne.

“This book provides an interesting and at times engaging overview of some of the work being undertaken within robotic art. As you would expect from a book about art, the quality of the printing is excellent with glossy pages and full-color figures throughout. … for those wanting to know more about this field, the questions that it raises, and the problems that it faces, this book will prove invaluable.” (Harry Strange, Computing Reviews, April, 2017)