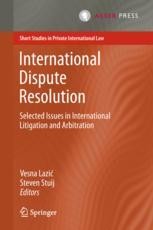 The contributions in this book cover a wide range of topics within modern disputeresolution, which can be summarised as follows: harmonisation, enforcement andalternative dispute resolution. In particular, it looks into the impact of harmonisedEU law on national rules of civil procedure and addresses the lack of harmonisationin the US regarding the recognition and enforcement of foreign judgments. Furthermore,the law on enforcement is examined, not only by focusing on US law, but also onhow to attach assets in order to enforce a judgment. Finally, it addresses certain typesof alternative dispute resolution. In addition, the book looks into the systems andcultures of dispute resolution in several regions of the world, such as the EU, the US andChina, that have a high impact on globalisation. Hence, the book is diverse in the senseof dealing with multiple issues in the field of modern dispute resolution.
The book offers explorations of the impact of international rules and EU law on domesticcivil procedure, through case studies from, among others, the US, China, Belgium andthe Netherlands. The relevance of EU law for the national debate and its impact on theregulation of civil procedure is also considered. Furthermore, several contributions discussthe necessity and possibility of harmonisation in the emergency arbitrator mechanisms inthe EU. The harmonisation of private international law rules within the EU, particularlythose of a procedural nature, is juxtaposed to the lack thereof in the US. Also, the bookoffers an overview of the current dispute settlement mechanisms in China.
The publication is primarily meant for legal academics in private international law andcivil procedure. It will also prove useful to practitioners regularly engaged in cross-borderdispute resolution and will be of added value to advanced students, as well as to those withan interest in international litigation and more generally in the area of dispute resolution.
Vesna Lazić is Senior Researcher at the T.M.C. Asser Institute, Associate Professor ofPrivate Law at Utrecht University and Professor of European Civil Procedure at theUniversity of Rijeka.
Steven Stuij is an expert in Private International Law and a PhD Candidate/GuestResearcher at the Erasmus School of Law, Rotterdam.
Ton Jongbloed is Guest Editor on this volume.